Fast moving windstorm lives up to billing: takes down trees, takes out power


The first indication that Tuesday might make for an interesting weather day came in the early morning hours when Environment Canada issued its original Wind Warning of the day, advising of a fast moving weather system, with the first and the final two lines of the advisory proving somewhat prophetic for Prince Rupert

"Strong winds with severe and damaging gusts are expected or occurring"

"High winds may cause downed trees or toss loose objects"

That in a nutshell was Tuesday afternoon ...

And while the arrival was perhaps a bit delayed from the early indications, once it came ashore the fast moving front provided for no shortage of work to follow in its wake.

As the winds roared to their 90 km/h plus projections they took out trees and pretty well any item that wasn't anchored down, along with those concerns, the power eventually would go out for much of the east side of the city.

With the extreme gusts of the 3:00 to 3:30 PM  period wreaking much damage to a BC Hydro pole and power line, with both suffering damage in the strongest of the gusts, shutting down the power supply for close to 3,000 residents for four hours and forty two minutes.

Fire, Police and City work crews were the first on the scene to keep residents at a safe distance, followed by Hydro work crews arriving to the area to assess and then begin their work on the situation at the corner of Frederick and 11th Avenue East, the road blocked to traffic from two locations to allow for the work to commence.

The majority of the outage extended from the Petro Canada at Hays Cove Bridge all the way to the east, though the dividing line appeared to be east of the McDonald's at 11th the McBride Street, with the restaurant remaining on the grid through much of the evening, something which made the restaurant one of the most popular spots on the east side. 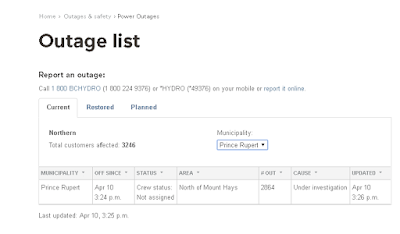 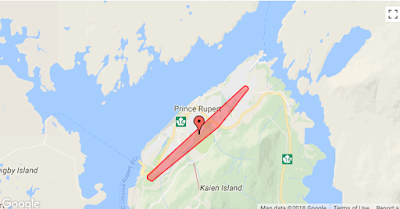 One block north of the Hydro line problems, another situation had developed, a stand of trees on the cliffs above Hays Cove Avenue had blown down, leaving the road impassible, the sound of heavy machinery and chain saws soon heard across the area as crews attended to that work.

There were other areas of the city affected by wind damage as well, downtown another stand of trees located across from Mariner's Park had toppled to the roadway, further into the Sunken Gardens reports of more downed trees came in, with Rupertites quick to the cameras to chronicle the wind event through Social media, with Facebook and Twitter recording the range of damage big and small from all corners of the city

The wind storm also provided the City of Prince Rupert the opportunity to put its new mobile application program into use, relaying updates on the ever changing situation and providing details for motorists  and residents as to what areas to avoid to, allow for work crews to attend to the damage.

By 5 PM the winds had moved on into the inland areas of the North Coast, leaving for residents and work crews to attend to the cleanup, perhaps a little more mindful to check the Environment Canada Weather Alert system a little more frequently to make preparations for similar events that may come in the future.

For more items related to weather events see our archive page here, while notes on BC Hydro can be reviewed here.


To return to the most recent blog posting of the day, click here.
Posted by . at 9:05 PM