Smoke was reported billowing from the home in the mid afternoon period when the alarm was called with trucks from the city's downtown Fire Station responding quickly to the call.

While the Fire department took to its work, members of the RCMP secured the roads in each direction and the alley way between Sloan and Omenica to keep passersby and neighbours at a safe distance. 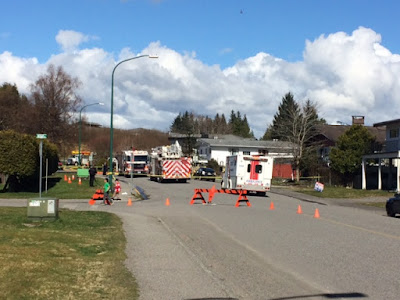 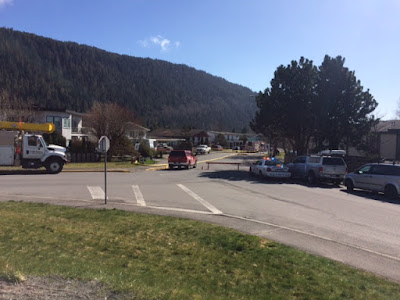 Fire Department personnel and members of the Prince Rupert RCMP detachment remained on the scene into the late afternoon and were expected to remain in place into the evening.

Road restrictions are in place around the scene, with traffic coming from the city re-routed down Omenica.

Traffic was also being turned back at Ritchie to the West and directed away from the scene where the both sides of Summit Avenue converge.

Update: April 16 -- Fire Crews had cleared the scene by 6PM, leaving a lone RCMP officer on hand to protect the scene, Sloan has also been returned to its regular traffic flow.

Update: April 17 -- The Prince Rupert detachment had the sad task of notifying the public of a fatality related to Monday's fire. (see here)


For more items related to the work of Emergency Responders in the Northwest see our archive page here.


To return to the most recent blog posting of the day, click here.
Posted by . at 4:47 PM