LNG development the theme for letter to Premier from Northern mayors


As a follow up to their recent travels to Ottawa to discuss LNG related issues with the Federal government, seven northern British Columbia mayors have penned a letter to British Columbia Premier John Horgan, providing a bit of a report on their trip to the nation's capital and to call attention towards their desire to see the industry find its feet in the province.

The letter, which is delivered through a Letter to the editor submission to the Vancouver Sun was highlighted by both the City of Terrace and District of Kitimat through their Facebook portals on Monday 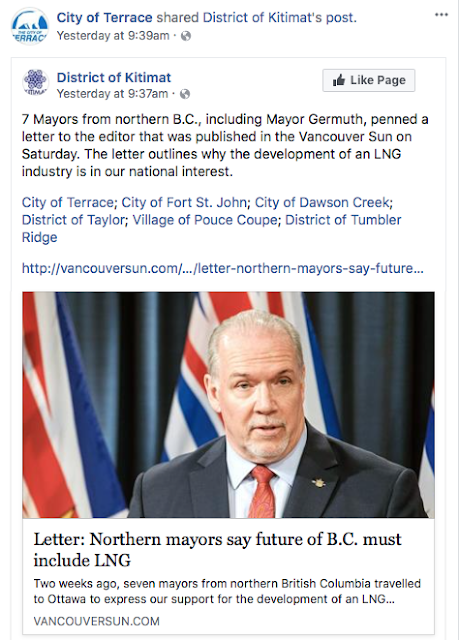 In their correspondence, the group stresses the importance of the LNG industry for the provinces future and noted how progress has been lost to the United States in recent years, as more and more proposals below the 49th parallel come towards investment decisions.

While we were in Ottawa, we were excited to hear about Premier John Horgan’s new fiscal framework for the development of the LNG export sector. Horgan addressed many of the burdensome measures that prevented a single LNG export facility from making a Final Investment Decision.

In the same amount of time projects were proposed, permitted and cancelled in Canada, the U.S. has started operating one export facility and has six more in the works. Clearly, something needed to be done to ensure the opportunity for LNG and the $22 billion in government revenue, the tens of billions of capital investment, and the 10,000 skilled jobs that come from construction wouldn’t be lost.

The group also had some thoughts on how the Horgan government is approaching LNG development and how it could lead to responsible development of the province's resources.

The Premier requires LNG projects to meet four conditions which demonstrates that it is not about developing LNG at any cost. These conditions include a guarantee of a fair return to B.C., jobs and training, respect and partnering with First Nations, and protecting our environment ...

As seven mayors of northern communities, we believe the future of B.C. must include the continued safe and environmentally responsible development of our natural gas resources. We applaud the Premier for his foresight in recognizing the potential an LNG export project can deliver.

The two northwest signatories to the letter are Terrace Mayor Carol Leclerc and Kitimat Mayor Phil Germuth, both of whom have been long time advocates for development of the industry in the region.

Prince Rupert Mayor Lee Brain seemingly has not been a part of the collective effort from the Northern mayors as they look to move the LNG industry forward in the region.

You can review the full text of their letter here.

For more items of interest related to the state of the LNG ambitions in the Northwest see our archive page here.