Northern Savings Credit Union, the Prince Rupert based financial services group that serves the Northwest in a number of communities is on the search for a new Vice President of Finance.

The quest for a new VP comes following the departure of Bill Nicholls, who left the position with Northern Savings at the end of March, he had been a part of the organization for over thirty years and was instrumental in guiding the financial services outlet in areas of operations, finance and in service as an interim CEO.

The process of accepting resumes and reviewing applicants began last month and it is anticipated that once a thorough review has been completed, the new VP of Finance will be located in either the Terrace or Prince Rupert offices of the Credit Union.

Taking on the duties of VP on an interim basis has been Bill Snell, who brings some extensive experience with him to the temporary position.

The details of the departure of Mr. Nicholls and the Credit Unions comments of thanks for his long term of service can be reviewed below:
(click to enlarge) 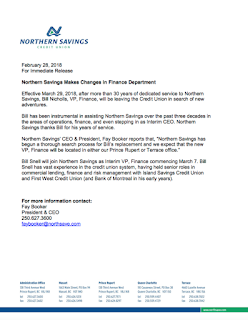 Northern Savings provides a full range of financial services across the Northwest, with offices in Prince Rupert, Terrace, Masset and Queen Charlotte City

For more items of interest related to the city's commercial sector see our archive page here.

To return to the most recent blog posting of the day, click here.
Posted by . at 10:40 AM

Email ThisBlogThis!Share to TwitterShare to FacebookShare to Pinterest
Labels: Changes at Northern Savings