Is there a future for the Pacific NorthWest LNG project?

Depending on how you wish to interpret a one line answer in a wide ranging interview with the magazine Business in Vancouver,  the prospect of the Malaysian Energy company Petronas dusting off some development plans could be something that could gain some traction again when it comes to their LNG ambitions for BC and Alberta.

Though whether the massive LNG plant for Port Edward makes a comeback, or if Petronas has some other destination, or project in mind is still very much of an unknown. 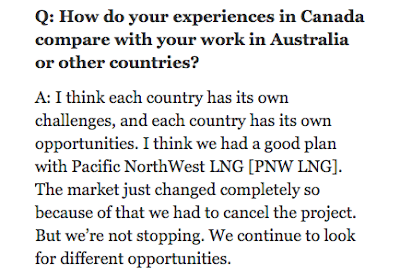 Petronas cancelled their plans for a thirty six billion dollar investment in the North Coast in July of 2017, though they continue to hold a large volume of gas reserve options in the Northeast part of the province.

The Pacific Northwest LNG inquiry made up but one question in a much wider overview of how the Malaysian energy giant views the current climate for investment in British Columbia. 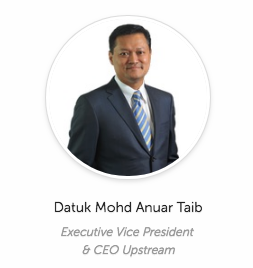 In the Business in Vancouver article, Anuar Taib, the Executive Vice-President and CEO of upstream
Petronas, explored a number of themes when it comes to the LNG industry in British Columbia and how the Malaysian company may yet play a role in it.

The Petronas Vice-President noted that the energy company is committed to Canada for a very long time and how North America is still considered a place for growth for their operations.

Among some of the highlights of the interview:

A belief that the energy industry continues to travel through a period of transition but that demand will continue to grow to deliver natural gas on the world market.

How Canada compares with other jurisdictions is also a topic and from that overview with the Malaysian energy executive making note of the recent initiatives announced by the NDP government in British Columbia, something that the company continues to study.

The topic of politics and pipelines is also something that the company keeps up to date on, with their Progress Energy office in Alberta making for the contact point for the company with government officials.

In recent months, Petronas has been mentioned as potential match up for the Kitimat LNG project, with Chevron reportedly looking to sell off its stake in the proposed terminal development.

However, when it comes to that discussion, the Malaysian company is not tipping its hand very much as to their interest in that option to access a terminal facility.

The article closes with a look at the long  term vision that the company may have for Canada, and for the most part, while there have been bumps along the way, Petronas is still looking towards five or ten years down the road and how they believe that they may yet include Canada as part of their global supply of natural gas.

You can review the full article from Business in Vancouver here

A look back at the history of Pacific Northwest LNG on the North Coast can be found here.

For a wider overview of the LNG industry in British Columbia today see our archive page here.

Email ThisBlogThis!Share to TwitterShare to FacebookShare to Pinterest
Labels: Petronas official on the state of LNG development in Canada