Monday's City Council session provided for a community tutorial on the City of Prince Rupert's latest tools when it comes to sharing information with the public, as Veronika Stewart the City's Communications Manager, took Council and those watching at home through the elements of an Emergency Notification System and a new application to access information on civic services and items of interest.

The Report compiled by Ms. Stewart, Fire Chief Dave Mckenzie and IT Manager Marko Kessler provided a short synopsis of the Emergency Notification Program, which helps to answer some of the questions and concerns from the January Tsunami Warning on the North Coast.

The overview of the Emergency Notification system highlighted its use for mobile devices, a program which requires residents to sign up through a subscription service and from that point will receive Emergency notification should situations arise that require immediate attention. It will compliment on the recently released program through the provincial EMBC Alert system.

Ms. Stewart noted that owing to privacy laws, the City will not be able to access phone numbers through CityWest, which leaves it up to the public to sign up for the program with either an online form or through paper applications which will be made available around the city.

The City's Notification System will alert residents in case of a local emergency and the steps that they can take to address the situation.

Visitors to Prince Rupert can also sign up for the service, for whatever period of time that they plan to stay in the community.

The Emergency Notification Service also spurred on some discussion on a range of themes, with the concept of a community siren once again making for a talking point, one however that found a few members of staff and council not particularly in favour of bringing back the large sirens once found in the city.

Councillor Randhawa introduced the often discussed topic, which led to a fairly vigorous review of the January tsunami warning event, with the City Manager Robert Long outlining his concerns over the calls for a community siren, suggesting that the difficulty with a siren is that it doesn't tell you anything and is not an effective way of alerting the public. He called the new app system that has been created as a far superior way to go,  as it explains what the emergency is and what steps the public should take.

Mayor Brain also weighed into the theme, sharing similar notes as Mr. Long, recounting the January event, noting how there had been some confusion in the community at the time, adding that there's a reason the City doesn't sound an alarm right away.

The Mayor asked Fire Chief Dave Mckenzie to offer up some background on how the city emergency response team handles such events, the Fire Chief took Council and those viewing at home through the steps they take for such events.

He observed that in the early morning hours of the January event that there had been fire and police personnel that were mobile around the community and could have taken action in any areas that may have been affected by that situation.

The Fire Chief also provided an update on the progress of the Tsunami Risk Assessment program, which the City is conducting with a consultant to determine risk areas of the community and how that will also go towards planning for any emergencies.

He observed that the nature of the geography in Prince Rupert makes it less concerned about a tsunami wave and more focused on a rush of water in a few lower areas of the community.

The Mayor offered up a few suggestions for how they could share that kind of information with the public as part of the notification and emergency response process.

As for how the City shares information, the City Manager also noted that they have to proceed with caution when it comes to information that they receive, with Mr. Long noting that while they can't compete with social media contributions but can only offer up what they can confirm as official legitimate information.

Councillor Thorkelson also covered a few points related to the January event noting the areas where potential evacuations may be required and how it was a fairly small sample of the city and how in the past residents in large numbers would panic and head for higher ground, in the case of Prince Rupert up by the hospital, which creates a number of other issues for access to that facility.

She observed that the city is handling the approach of notifying the public properly, with the app an excellent device and addition to that work, she also called on the media in the community to help spread word of the app and to help reinforce the idea that there are only a certain number of parts of the city that are in any potential risk. 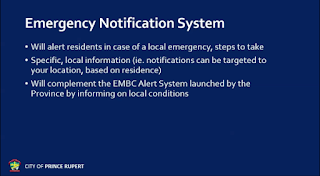 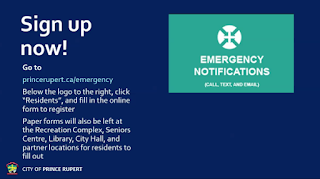 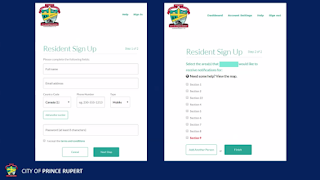 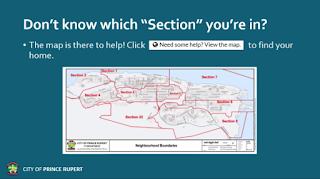 The second portion of the presentation focused on the latest feature from the City to increase the ability to share information with the community, that through a new application that citizens can access for the mobile devices. 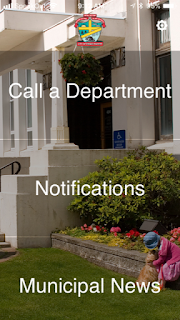 The mobile app is available for download now, you can access and download the required apps for your mobile devices by way of typing Prince Rupert into the search engine of whichever Mobile App store you happen to use

The project which was done in house through City Staff and the City's IT department provides for a range of material and links related to the City of Prince Rupert,
featuring a number of categories to explore, included on the list:

The Report to Council also highlights the range of access that is now available through the city's 311 phone service, where links to a number of City Departments can be accessed by following the prompts from the phone menu once you call in.

Council members offered up much praise and appeared very impressed with the work of city staff to create the new app and offered up some thoughts on how they could improve or expand on some of the elements for it.

Council members made note of some groups and organizations that the city may wish to reach out to, not only to get more background for the app but to share word of how it works and the value it will bring to the community.

As things turned out, the City had an opportunity to put their information system to the test on Tuesday, that as a significant weather system brought strong and damaging winds through the city in the late afternoon period.

The Tutorial on the new services from Monday night is available through the City's Video Archive, starting at the four minute mark.

Further discussion topics from Prince Rupert City Council can be found on our Council discussion page.