Jersey Day brings schools, sports organizations and communities together in support of Humboldt 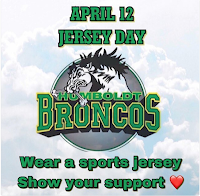 Those living on the North Coast have been going through their closets this morning, selecting or borrowing a hockey sweater to wear to school or work, as Prince Rupert joins in on a nation wide show of support for the community of Humboldt, Saskatchewan.

That rural community on the prairies continues to grieve the loss of sons, daughters, fathers and friends as a result of the horrific bus crash of last Friday evening when a team bus carrying the members of the Humboldt Broncos hockey team was in a collision with a semi-truck as the Broncos were travelling to a playoff game in Nipawin, Saskatchewan.

The highway incident, one which was every parent's worst nightmare, claimed sixteen souls and left thirteen others injured, with many still in hospitals in Saskatoon.

The days since word first arrived of that terrible night in Saskatchewan has seen the country find various ways to show their support through the week, whether by participation in a Go Fund Me initiative in support of Humboldt, or the simple placement of hockey stick on the front porch in memory of the players and support for the community. The Go Fund Me program has raised close to 9.5 million dollars so far from Canada and around the world in support of the families, while the opening of the NHL playoffs on Tuesday saw NHL teams put sticks out and offer other signs of solidarity with Humboldt.

Today has been put aside for Canadians to wear hockey sweaters as one more tribute of commemoration for the players and that community.

In Prince Rupert, Ecole Roosevelt Park Community School was the first to indicate it would be observing the day with hockey sweaters, with a range of other schools and organizations joining in, you can find a sample of some of those in this community that are participating here.

You can learn more about todays #JerseysForHumboldt day from our item of Monday, as well as to  provide your own support through that hashtag on Social Media through the day.

To return to the most recent blog posting of the day, click here.
Posted by . at 9:33 AM

Email ThisBlogThis!Share to TwitterShare to FacebookShare to Pinterest
Labels: Jersey Day for Humboldt