On Monday night, the City of Prince Rupert's Small Business Committee delivered the much anticipated overview of their findings from a one year study of a range of economic issues in the community.

And as Councillor Blair Mirau revealed the findings from the report, those watching at home, or from the gallery, might have noted that the document seems to be quite in sync with the path that City Council has put forward on similar issues over the last four years.

The review of the findings to a fashion providing for what could be seen as a fairly strong endorsement of the efforts of City Council, and their work in exploring many of the current issues of note.

Beyond the themes of small business in the community, the report also tackled a range of topics such as Port taxes, tax arrangements with other communities and the work of the Resource Benefits Alliance, areas of concern that some might consider a bit beyond the scope of a what a "small business" overview might examine.

Monday night, Mr. Mirau outlined the history of the project first introduced in January of 2015, the concept of which began to pick up steam one year later n January of 2016,

Beyond his short overview of the timeline, Mr. Mirau then reviewed the key elements of the report which provided for both goals and objectives for City Council to consider at an upcoming workshop to review the document.

Called the Small Business Development Action Plan, it is designed to address such themes as Easing the Tax Burden on Small Business, as well as to encourage growth and reduce restrictions. 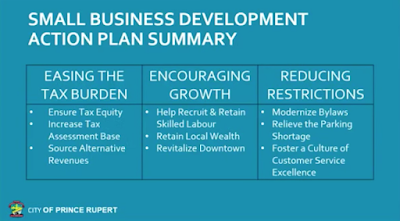 The section devoted to the tax burden on the community made note that of the communities of the Northwest, only Gransile has a higher tax rate than Prince Rupert, with the report recommending a number of action items to achieve tax equity. 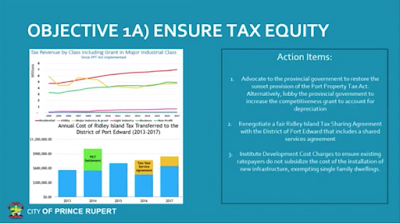 Included on the list of their action items were concerns on the province's Port Property Tax Cap, something often expressed by City Council, as well as the need to renegotiate the Ridley Island Tax Sharing agreement with Port Edward, another theme that City Council has been making a significant push towards over the last few years. 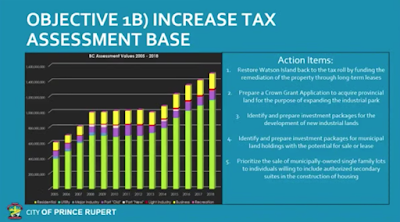 Among some of the elements related towards increasing the assessment base were:

1.  Restore Watson Island back to the tax roll by funding the remediating of the property through long-term leases to industrial and logistics partners in the private sector.

2. Prepare a Crown Grant Application to acquire provincial land for the purpose of expanding the industrial park.

3. Identify and prepare investment packages for the development of new industrial lands on designated municipal properties.

4. Identify and prepare investment packages for municipal land holdings with the potential for a phase sale or lease program to support new development.

5. Prioritize the sale of municipally owned single family lots to individuals willing to include authorized secondary suites in the construction of housing. 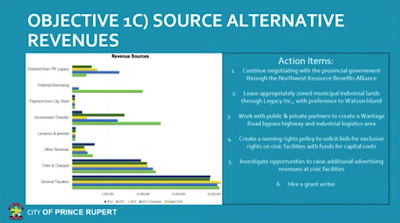 The quest for additional Revenue streams also provided for six items of note:

1. Continue negotiating with the provincial government through the Northwest Resource Benefits Alliance to ensure equitable resource revenue sharing similar to the Northeast and Peace regions.

3. Work with appropriate public and private partners such as the provincial government, Prince Rupert Port Authority, DP World, and other port partners to create a Wantage Road bypass and industrial logistics area.

4. Create a naming rights policy to solicit bids from local businesses and corporations for naming exclusive rights on civic facilities with funds to be utilized for capital costs only .

Towards Encouraging growth in the community, some of themes of recruiting and training skilled labour were brought forward.

Including a call for partnership with Community Futures and the Economic Development office as well as to develop a welcoming package to attract new businesses that is endorsed by the Mayor and liked to the City website.

To retain local wealth the committee would like to encourage spending at locally owned businesses such as those found through the Love Prince Rupert initiative, as well as to support a Business Energy retrofit program and to investigate what they called Social procurement to maximize social and environmental benefits in awarding contract to local businesses and non-profits. 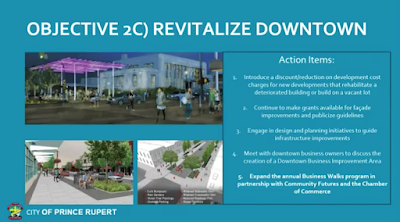 The Committee also offered up some thoughts on Downtown Revitalization, with seven action items for review, with themes ranging from bylaw issues to grant opportunities for facade improvements and rehabilitation of vacant lands and deteriorating buildings.

When it comes to revitalization of the downtown area, a good portion of their observations seemed to endorse much of the City's recent planning proposals for such things as a festival square adjacent to City Hall and housing plans to increase the ability for residents to find affordable housing in the downtown area. 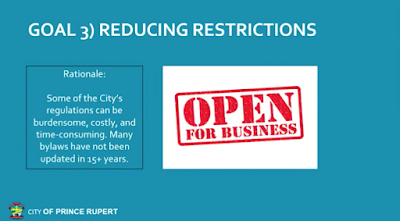 When it comes to reducing restrictions, the push was towards the  modernization of a number of bylaws, as well as to address the parking shortage downtown, particularly towards the issues that are found in some areas of the 3rd Avenue.

The report also looks to create a culture of service excellence in the community, including a review of best practices in the municipal sector when it comes to customer service delivery, as well as to consider the creation of a Business Ambassador program to create a single point of contact.

The full report is available for study from the City's Agenda Package from the April 23rd sesison, starting at the three  minute mark of the evening's proceedings.

The video of the presentation can be viewed from the City's Video archive starting at the same point.


When it came time for comments or observations on the document, the report received some very positive reviews from a few members of City Council with Mayor Lee Brain leading the chorus on a job well done.

"I just want to say great job to you guys and the committee for these recommendations, I really in particular like how you have taken a lot of the initiatives that are underway and made it coherent into fitting them into a plan like this, I think it is a brilliant job done"

And while the Mayor noted that discussion of the individual elements was best left to the planned workshop session for sometime in May, he did highlight two themes that they had delivered some background on that he was pleased to see as part of their report.

"It's great to see the City, the Chamber, Community Futures and business leaders in the community all coming together to work towards ... and also to acknowledge some of the problems the community is facing in terms of the Port Tax Act and the Ridley Island Tax Sharing Agreement, these are big financial pressures for the city and to acknowledge that through this, is very helpful to us as well"

Councillor Cunningham also had a few observations to share on their report and offered up his own strong words of support for the Committee's work.

"Having sat in on some of the meetings, I want to say, that I have never met a group of people that wanted to work together in a cohesive unit and get a change to this city, which I think the city needs. And I really admire the group for putting the time and effort in that they did to do it, they want some changes made, we need some changes made and this is a fantastic start and I think it's something that we have to continue in the future, with small business and other groups in the city so we can actually get people together and start caring and do something about it"

Councillor Niesh also offered his thanks for the report and advised he was looking forward to reviewing the project in workshop.

One council member not heard from on the topic on Monday, was Councillor Joy Thorkelson, she had previously expressed some reservations about the nature of the committee back in its formative days.

Council passed the motion on Monday to receive the report and will review it further at a workshop session to be scheduled for sometime in May.

For more items related to Monday's City Council session see our Council Timeline Feature here as well as our archive of  notes from the Monday meeting.

For more items of interest related to the city's business sector see our Commercial Sector archive.