CN Rail is launching an ambitious plan to try and quickly build up its rail infrastructure in Western Canada, looking to solve a number of issues that has put the rail line operations in the spotlight in recent months.

The railway has already begun the process of purchasing more rolling stock and making plans for adding to track, particularly for its operations into the ports of Prince Rupert and Vancouver.

Both of those networks have seen a number of delays over the last few months, some related to weather, others to lack of rail cars, congestion issues and staffing concerns that have all led to delayed shipments.

A look at the spending plan ahead can be reviewed below:

Part of the focus ahead for CN may even see the railway divest itself of real estate holdings in order to raise cash for the investment plan, with the railway already having sold over 150 million dollars of what they call non core assets in the  last month.

On Monday, the railway released its first quarter results, with the railway's profit seeing a sixteen percent drop, the cause noted to be the impact on higher operating expenses. 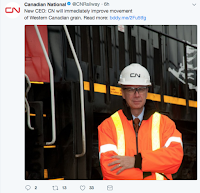 As part of their Monday overview of rail operations, CN noted the increase to their capital program to move forward with their plans.

“We’ve increased our capital program to C$3.4 billion, with approximately C$400 million being invested in new track infrastructure, particularly in Western Canada, to build capacity and improve resiliency ...  With the people, equipment and infrastructure in place, and with a solid pipeline of growth opportunities ahead of us, we are confident in our ability to bring long-term value creation to our customers and shareholders.” -- CN Interim CEO and President JJ Rouest

Last week we outlined some of the plans that CN has for the Northern line from Prince Rupert to Prince George, with plans to increase track and create sidings between the two cities, as well as to hire on a significant number of workers to address staffing shortages across the system.

The replacement plan probably can't come soon enough for those that are shipping goods along the rails, accounts of bottlenecks and delays continue to make news, with grain shipments the current focus of concern as of last week, with grain continuing to pile up owing to rail car shortages and staffing issues.

B.C. grain piling up after weeks of CN rail delays
Poor planning by railways leading to losses for farmers

For more items related to CN's operations across Northern BC see our archive page here.


To return to the most recent blog posting of the day, click here.
Posted by . at 11:56 AM