It would appear to be a wee bit behind schedule, but as the more helpful weather arrives things are moving along much more quickly at the Prince Rupert Yacht Club clubhouse development.

The plans to bring the new structure to life were revealed for Prince Rupert City Council in the Spring of 2016, providing for a striking visual image for the city's Cow Bay waterfront complete with what would be a low intensity lighthouse as an accent piece. 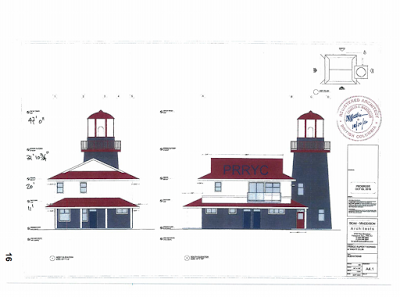 The land clearing and parking lot work was the first phase and then the framing, which was followed by a somewhat lengthy delay before work took off again earlier this year.

Since then though the changes have been noticeable by the week with things appearing to be on a fairly steady schedule into the Spring bringing the Yacht Club members closer to opening their showcase building which should quickly a much photographed attraction for the Cow Bay waterfront area.

Some of the background to the project can be found below:

More notes related to tourism in Prince Rupert can be found on our Tourism archive page.


To return to the most recent blog posting of the day, click here.
Posted by . at 8:46 AM