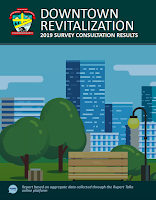 A desire to see some increased shopping options makes for the largest theme from the city's recent consultation on downtown revitalization, a process that took place through the city's Rupert Talk's initiative in the months of March and April.

205 responses were received during the consultation period which beyond the state of the city's commercial sector, also explored transportation to and around the downtown area, the state of condition of many of the buildings downtown and whether residents have any desire to reside in the core area of the city.

As for the data trends, when we visit the downtown area it is for the most part with four destinations in mind, Grocery stores, Banks and financial institutions, Doctor or Medical services and Retail stores.

For those considering opening a new business in the city, the five most requested responses called for clothing stores, drive through dining options, sports stores, shoe stores and the often desired arrival of big box stores. 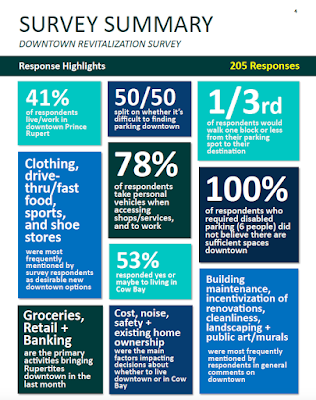 The vast majority of Rupertites 78 percent of us, make our way downtown by way of personal vehicles, 15 percent walk, with 3.5 percent making use of public transit. Once we get to our preferred destination, it's a fifty/fifty chance that we will find a parking spot close to where we are going.

The farthest that we will go from our destination to park is no more than three blocks, with 43 percent finding that an acceptable distance, 33 percent will only park within one block or west, while 13 percent are up for a hike, willing to park at least 4 to 6 blocks away from their destination.

As for living downtown, 63 percent of the respondents indicated that was not something on the to do list, with cost, noise, safety and existing home ownership noted as the reasons why the downtown area did not offer much appeal.

The same question for the Cow Bay District provided slightly better returns with 53 percent indicating that they would live or at least consider the prospect of calling that ever evolving area of the city as home. 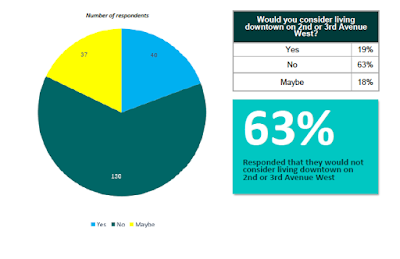 As for  what we like most about the downtown core, respondents included the heritage aspect of the core, it's walk ability, the landscaping that is found there and the existing businesses that can be found in the major shopping sections.

Beyond additional retail options for the downtown, suggestions towards revitalizing the current state of the city's centre, included a more dedicated effort by building owners towards maintenance, as well as some incentives for owners to take on renovations

Also gaining some attention were calls for Improvements towards cleanliness, landscaping and public spaces, with some suggesting more art and murals for the area.

The results of the findings will be shared with Prince Rupert City Council, the Board of Redesign Rupert, the Prince Rupert and District Chamber of Commerce, as well as other community partners.


You can explore all the data here.

More items of note on City Council discussions and initiatives can be found from our archive page.