A  vessel fire at Rushbrook Floats brought out a full response of Prince Rupert Fire/Rescue, RCMP and BC Ambulance responders early Friday morning, with all racing to the floats east of the Canadian Fish Plant and warehouse site.

The three responding services were dispatched to the area after the  morning calm of the Prince Rupert waterfront was shattered by a loud explosion from that area just before 5AM, with fire fighters arriving to find a vessel fully involved.

As a result  of the quick work of the PRFD the situation was said to be contained to just the one vessel.

As of yet, no further details as to the nature of the incident, or if any injuries were suffered from it have been released. We will add more background to the incident as it becomes available.

Update: Video posted to the West Coast Fisherman Facebook page provides a look at the scope of the blaze this morning.

The Prince Rupert Fire/Rescue Department has also posted details of this morning's incident to their Social Media feed along with some photos of the work on the fire. 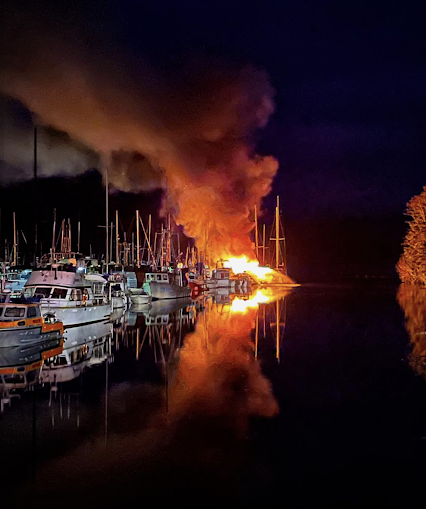 Further items of interest on the work of Emergency Responders can be reviewed here.