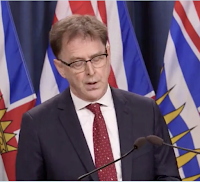 The efforts of those working for Northern Health were recognized Thursday by Health Minister Adrian Dix, who used part of the afternoon COVID briefing to highlight the many challenges that were faced across the Health Authority and the extraordinary efforts to tackle them that were put in motion by health care workers.

And I'm happy to say that Northern Health has been able to slowly resume some non-urgent scheduled surgeries at the University Hospital of Northern British Columbia in Prince George."

The Health Minister attributed some of that ability to return to more normal operations to the recent vaccination program in the north and how that success has been expanded elsewhere in the health authority.

"It is in part due to an effective vaccine strategy to limit the spread in Northwest BC as you saw on Monday are taking the same community approach in Dawson Creek, as well as several other communities across the province. This is excellent news or patients in the North and we should all be encouraged by this development"

Doctor Bonnie Henry also observed on the strategy of the current immunization program and took note of the results found from the Prince Rupert and some of the other community vaccination programs.

"Those are the things we are looking at. Here in BC we have a number of examples of that as well.

Prince Rupert where we did a whole of community, the amount of transmission dropped off dramatically.

We saw the same for the Cowichan Tribes where we had a lot of transmission in that community and immunization has stopped that in its tracks.

We've seen it in the Downtown East Side where a targeted immunization has meant that we have dramatically decreased the amount of virus that is circulating in those most at risk in that community and that in turn has protected St. Paul's Hospital for example.

The comments can be reviewed as part of yesterday's update starting at the nineteen minute mark.

As Mr. Dix and Doctor Henry both noted, the results of the March vaccination program has provided stellar results particularly in the Prince Rupert area. 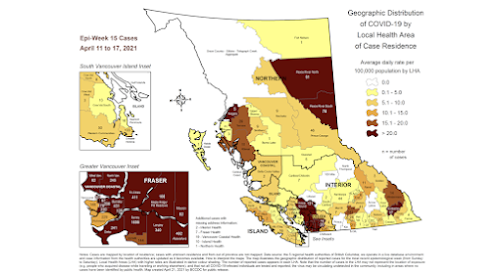 On Wednesday evening we relayed the most recent data from the BC CDC which indicates that one month following the vaccination clinic at the Jim Ciccone Civic Centre, the week of April 11 to 17 saw only three new cases of COVID reported in Prince Rupert.

Still, there are some challenges still being faced by Northern Health, with three high profile exposure cases still to be cleared.

So far Northern Health has not lifted the COVID exposure notices for Prince Rupert Regional Hospital or the Cranes Crossing Shelter.

As well, the advisory of the second outbreak at the Acropolis Manor Long Term Care Facility still is in place.

The first wave of COVID at that facility in January tragically saw sixteen residents pass away. 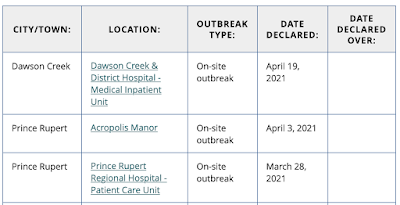 More items of note from Northern Health can be explored through our archive pages here.
Posted by . at 10:55 AM