A report just released by the Parliamentary Budget Office offers up some themes that the Federal government's use of the Federal Infrastructure Bank is showing little in the way of results to date.

With few success stories for the Federal Liberal government to share with the public.

The report, which you can review here, notes:

Four years into its mandate, funding is being disbursed by CIB much slower than planned. As of April 22, 2021, CIB has publicly announced $5.1 billion in investments for seventeen projects. However, finalizing contracts and the actual disbursement of money has lagged the CIB’s own projections. By December 31, 2020, CIB disbursed $1.2 billion, which falls $2.0 to $4.1 billion short of prior plans (62 to 77 percent).
When looking to the future, the report isn't particularly enthusiastic either, observing the following:
Given the status of CIB’s investment activity four years into its mandate, and informed by the historical disbursement rates of comparable organizations, PBO projects that CIB is unlikely to realize its mandated objective to deliver $35 billion on a cash basis over 11 years, that is by the end of 2027-28.20
And the list of projects on the go at the moment, certainly doesn't give an indication that the massive infrastructure needs across the nation are being met, particularly in British Columbia which does not appear on the list. 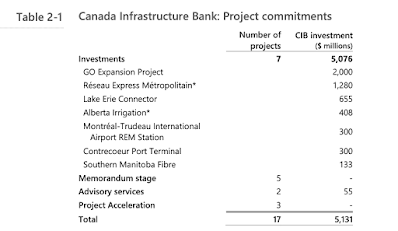 From those findings, Taylor Bachrach the MP for Skeena Bulkley Valley took the Government to task for their lack on success in moving forward on important infrastructure issues.

The MP raised his concerns as part of Thursday's Question Period in the House of Commons, calling on the Liberal government to scrap what he called a privatization project that is failing Canadians; noting how it is not getting the job done of building projects that Canadians need.

"The bank is actually a barrier to getting projects done, but this government keeps pouring more money into it, doubling down on helping private investors profit through the bank'-- Taylor Bachrach in the House of Commons Thursday

Catherine McKenna the Minister for Infrastructure and Communities didn't take the bait on that suggestion; instead reciting a list of some of the initiatives that she says the Infrastructure Bank is taking on.

For more notes on the work of the Skeena-Bulkley Valley MP at the House of Commons see our archive page here.