Residents of the North Coast looking to resume their travels through the YPR gateway to Vancouver will have to delay their planning for five days, with the Prince Rupert Airport Authority noting today that there is a revision to the restart plan for Air Canada.

Previously set for a June 19th return, the national airline has advised the airport that the first flight back to Prince Rupert will now not arrive at the gate until June 23rd. 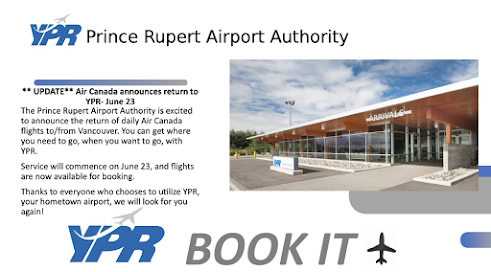 Travellers to and from Prince Rupert have been without a local connection to Vancouver since mid January when Air Canada suspended service to many of their regional routes including the North Coast service to the Digby Island Airport.

That left local residents with only one option,  that of the ninety minute transit to Terrace which remained in operation through the winter and spring months.

Last week, the Federal government announced a number of financial measures to lend assistance to the national carrier, though as part of the conditions of their support was a call for a return of service to those communities which had seen their service suspended.

It had been hoped at the time that would mean an earlier return for service date for Prince Rupert, but as the COVID landscape continues to evolve, so to it seems does the return to service planning for Air Canada.

You can keep up to date on items of note from YPR through their social media page and website.

For more notes on aviation in the Northwest see our archive page here.