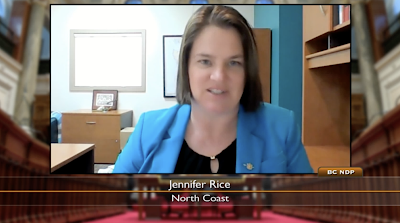 North Coast MLA Jennifer Rice hailed the recent announcement towards improving cellular service along  the highway 16 corridor between Prince Rupert and Prince George, providing the members of the Legislature with some personal remembrances of the dangers of the travel along the road also known as the Highway of Tears.

Ms. Rice was speaking to this announcement from earlier this month, which announced close to 12 million dollars in funding for improvements from the Smithers to Prince Rupert stretch of the highway.

The MLA's presentation to the Legislature came as part of the Thursday morning session.

Driving to Terrace from Prince Rupert in the summer of 2014, I pulled over on the side of the road and took my dog out for a pee. I also accidently locked my keys in my truck. There I was, at this pullout on the Highway of Tears, locked out of my vehicle and alone in the woods along the river with nothing but trees, rocks and river. I was really frightened. My cell phone didn't work.

It would have been less scary had there been continuous cell service from Print Rupert to Prince George, because I did have a cell phone with me. Had there been cell service, I could have called for help.
Ms. Rice also made note of a horrifying story that involved the late Marlene Swift, who had long been an advocate for improved safety on the highway until her passing two years ago.
My friend Marlene Swift drove taxi in Prince Rupert. She was once held at knifepoint and kidnapped in her cab where she was brutally raped. She was left for dead in a ditch in the woods along the Highway of Tears. Naked and bleeding, she crawled through that ditch until she felt far enough away from danger to flag a passing vehicle. She lived to tell her story, but sadly, passed away in 2019.
She was thrilled when this government was able to add intercommunity bus transportation along Highway 16, and she would have been thrilled to know that earlier this month we announced that cellular service will soon be available along the entire stretch of Highway 16.
Towards the progress made just recently the MLA relayed how the efforts will address many of the long standing concerns for travel in the region.
Through provincial and federal government investments, the entire 725-kilometre route from Prince Rupert to Prince George will soon be serviced by cellular.
Solving the problem of cellular gaps between communities along Highway 16 was recommended in 2006 for enhancing safety for Indigenous women and girls at the Highway of Tears Symposium.
This recommendation was echoed six years later in the report from the national inquiry into missing and murdered Indigenous women and girls. Rural connectivity is important for everyone travelling northern highways, but this investment is key to ensuring women, especially Indigenous women, are safer.
Thank you to all the partners and the Ministry of Citizens' Services for finally filling these important gaps. For us in the north, our lives depend on it.
The transcript of Ms. Rice's comments can be reviewed from the Legislature Hansard archive, while a video presentation of her presentation to the Legislature can be viewed from the Legislature Video archive here, both items are found at the10:15 AM mark of Thursday's session.
More items of note from the BC Legislature can be found from our archive page here.
Posted by . at 10:48 AM