One stop approval for City Budget and Tax Bylaws for 2021

Prince Rupert City Council has approved and given all four readings required for the 2021 budget and property tax bylaw, giving the Financial Office the green light to move forward with their notification and collection plans for later this spring.

The passage of the Budget came at Monday's Council session following a short presentation from the City's Chief Financial Officer Corinne Bomben who relayed some final thoughts on the community consultation process that was used this year.

With Ms. Bomben noting of the 14 submissions delivered and of 185 page views that their budget simulation tool received.
Of the submissions received , 1 person proposed a tax increase, 1 person a tax decrease while 12 participants had recommended no change.
From the program the key takeaways were that some participants wanted more paving done, as well as decreases to capital reserves transfers, the airport ferry, recreation service costs and public safety costs.
Other notes culled from the engagement were that people enjoyed the budget simulation tool and the information received from it; as well as to note that the  city will use the data collected to provide for more information.
As for the Budget plan, Ms. Bomben reinforced the Zero Tax increase recommendation  which was endorsed in March and noted of no significant changes from BC Assessments other than one Payment in Lieu of Tax eligible property on Federal land,
That increase would have brought in 1.4 million dollars in additional PILT For 2021 than originally calculated.
Though the CFO did note that it is been appealed with the City having to set up a provision for the additional amount pending the outcome of the appeal, which will not require a change on the budget overall.
Council members had no questions to ask of the CFO on the night, something which led the Mayor to observe of the stark change since the 2015 presentation.
"Well that is a stark change from 2015's budget conversation, I'll tell you that. I think it's been pretty articulate Ms. Bomben, the presentations that you've made and I think that the community is starting to see major change here in terms of the city's financials.
We appreciate all the work from staff have gone into preparing this document. I know how much effort and work this is and I now with the deadlines and how it all works is that you work late at nights to get this stuff done.
So we really appreciate all those efforts that you guys have put out there so that this community financially is getting back on track and all our initiatives that we've been employed these few years is starting to come to fruition so it's really great to see" -- Mayor Lee Brain on the completion of the Budget Process for 2021
Councillor Mirau did weigh in on the success of the budget, observing how the easy headline would be no tax increase again for Prince Rupert; but reinforcing his opinion that the larger success is putting money into capital reserves without raising taxes.
'I'm going to repeat myself from when this budget was first released, I actually think the headline is the fact that we are able to put away 850,000 dollars into capital reserve ...  without raising taxes. To be able to to do that without raising taxes marks a turning point in Prince Rupert where it simply wouldn't have been possible the last few years" -- Councillor Blair Mirau
The Councillor then recounted the many challenges that the City has had to take on in recent years and how the Council has had to dedicate all its energy and focus to address them and how now they as a Council can finally turn its attention to other areas.
Council was able to adopt the final  reading of the document at one sitting owing to special measures put in place by the Province owing to COVID-19.
You can review the themes of Ms. Bomben's presentation from the City's Video Archive starting at the  22 minute mark.
On Tuesday, Mayor Brain used his Social Media portal to highlight the work of Council on the financial plan as well as to note how the Council will soon be able to turn its attention to some of the frequent topics and items to address that Council members have heard from community residents. 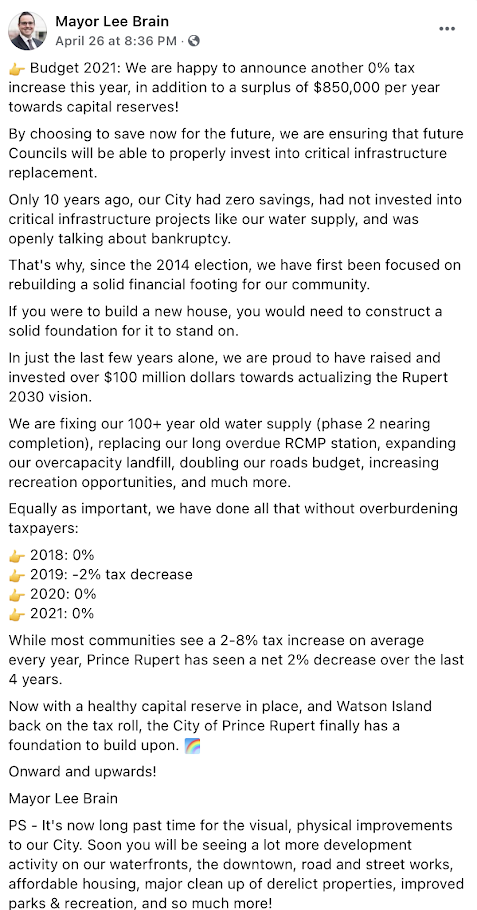 A look at the path that Council took towards the adoption of the 2021 Financial plan and property tax bylaw can be reviewed from our Budget Archive page.
More notes of interest from Monday's City Council session can be found from our Council Timeline Feature here, a wider overview of past Council Discussion themes can be explored here.
Posted by . at 12:37 PM