Update: Dec 9 -- BC Ferries has revised its resumption of service schedule to Haida Gwaii, with a Tuesday Dec 9th departure for Skidegate now pushed back to 6 PM (see full details here) 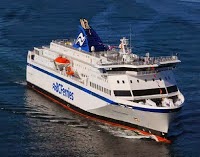 With storm conditions brewing off Haida Gwaii, BC Ferries issued a Service Notice on Sunday, outlining some revisions to the scheduled sailings for the Northern Expedition over the next 48 hours.

The 10 PM Sunday sailing from Prince Rupert to Skidegate did not set depart as scheduled, with the revised travel time now set for Tuesday, December 9th with a 10 AM departure from the Prince Rupert Terminal, with a 4 PM arrival in Skidegate

Any further updates to those revisions can be found from the BC Ferries website.
Posted by . at 11:08 PM

Email ThisBlogThis!Share to TwitterShare to FacebookShare to Pinterest
Labels: BC Ferries Service Notice for December 7-10