The initial reviews would appear to be cautiously optimistic when it comes to the progress in discussions between the Province of British Columbia and the Malaysian energy company Petronas.

Not much was revealed from the first of the discussions, which are of a fair amount of interest to residents of the North Coast awaiting word on one of the more promising of proposed LNG Terminal developments for the region.

Premier Clark, offered up a short review of the initial meeting between the two groups, suggesting that the Province has put in place the structures that should provide the right environment for Petronas, though she did not offer up any specifics when it came to the nature of those talks on Monday.

The Globe and Mail's Brent Jang took to twitter to provide a short glimpse into how the Province's LNG Minister Rich Coleman and Pacific Northwest LNG's Spencer Sproule viewed the days talks. 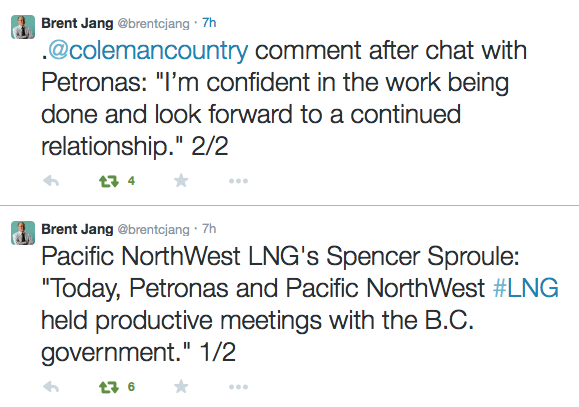 No timeline as to how many meetings the Government and Petronas representatives have on their schedule for this week.

You can review some of the background on the Monday sessions from the items below, we'll update the listings as more items become available:

Email ThisBlogThis!Share to TwitterShare to FacebookShare to Pinterest
Labels: December 2014, Petronas talks with BC Government