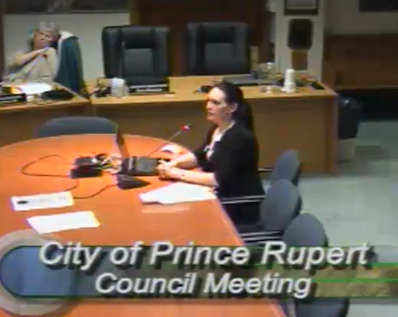 The City's Financial Officer provided the first glimpse for the public towards the financial blue print for 2015 for the City of Prince Rupert, as Ms. Corinne Bomben delivered a thirty minute Budget presentation to City Council. on Monday evening.

Offering background on the considerations required to form a budget and providing her department's recommendations to help address an anticipated 200,000 dollar budget shortfall, with a recommendation of a 1.9 percent increase in the mill rate for 2015 to cover off that issue.

She also highlighted some of the financial challenges that the Airport Ferry continues to provide to the City, with the residents of Prince Rupert carrying a larger share of the burden than those who don't live in the city. Those service challenges will require a subsidy of $925,000 for ferry operations in 2015. In addition to the concerns the City has when it comes to Port related lands and provincial issues, the City's CFO provided a review of the break down on taxation resources available to the city from all sectors of the community.  Reviewing for Council the different rates in place ranging from residential to commercial and industrial interests.

Included in that review was a look at the impact from taxation that is felt by rate payers in those three areas.

The presentation also provided opportunity for Ms. Bomben to highlight some of the potential sources of revenue that the City has access to. As well as to make frequent mentions of the City controlled Legacy Corporation and how it could deliver returns to the community, with Ms. Bomben delivering the popular refrain of late that the community is on the brink of a boom.

Her documentation to council offers a brief outline as to how the Legacy Corporation plans to allocate its financial resources over the next few years.

As for the other City controlled corporation, Ms. Bomben advised that CityWest will deliver a dividend of $400,000 this year, the same amount that they provided to the city in 2014.

Her presentation also offered up a look at some of the expenses that the City is required to address, including a breakdown on some of the largest requirements from the City's Financial accounts.

On that theme she identified a number of areas where the majority of the budget is allocated towards, with the following five areas making up 71 per cent of the budget allocations through taxation:


Among some of the expenses the City faces for 2015:

The Operations Budget will include $310,000 in Capital Purchases

Upcoming Salary requirements and benefit rate increases as part of contract provisions will provide an additional cost of $400,000 in 2015.

Increased energy costs of $35,000 will also contribute to the City's expenses.

Staffing succession planning and increase in needs will provide for an increase of $100,000

Towards that shortfall, the Finance Department is recommending a mill rate increase of 1.9 percent for 2015,  making for an average increase of 37 dollars per taxpayer for this year.

Ms. Bomben also suggested that Council give consideration to development of a Reserve Policy to replenish reserves and replace infrastructure concerns. That part of her presentation provided the benefits to the community that such a fund would provide.

The recommended rate to fund any establishment of a  Reserve Fund would be set at 2 percent mill rate to be put in place perpetually, listed as a separate line item on the tax bill.

That however is a proposal that will perhaps be addressed later this year, with Ms. Bomben at the moment, expressing no intention to begin the process of assembling that 2 per cent from taxes, if approved by Council, until sometime in the future.

As well as the Financial budget overview, Ms. Bomben also advised Council that the City had received a final letter of notice from the RCMP regarding the need for a replacement building for the local detachment.

Should the City not move forward on the long delayed proposal of replacement, the RCMP is now in the position to build their own building of their own design and bill the city for the construction.  Council will soon engage with the public on the need for the new building and the proposal to move ahead.

The presentation to Council is really just the first draft of her proposals, some of the suggestions may be revised depending on the instructions of Council.

Before that takes place however, the public will have the opportunity provide their review of her first draft.

Council will delay any direction to staff regarding the Budget Proposals until after those public engagement sessions take place.

Her presentation which is something well worth taking in, offers the viewer the full scope of budget considerations that she provided to Council.

A larger overview of the discussions on the Budget presentation can be found on our Council Timeline feature.