Rent them while you can! Redbox to close operations in Canada. 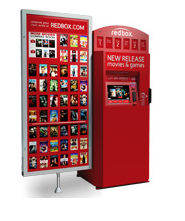 Video fans who make their rentals at the Red Box location inside Prince Rupert's Canada Safeway location will want to get in as many movies as they can, as quick as they can.

As of February 13th the Canadian branch of the Chicago based company that provides movie rental machines across the country will be starting its shutdown of the rental option.

Last week Redbox announced it's timeline in bringing to an end its movie rental service in Canada, with February 13th the last date for rentals to be made, with the last return date for movies being March 5th.

The majority of the stock and machines across the country will be returned to the United States by the end of the month.

Like the once ubiquitous video video rental stores of years past,  the video machine option has been in decline as more and more Canadians turn to online streaming and rental options for their movie entertainment.

More items related to commercial sector developments in Prince Rupert can be found on our archive page.
Posted by . at 12:24 PM

Email ThisBlogThis!Share to TwitterShare to FacebookShare to Pinterest
Labels: Redbox kiosk to close in Prince Rupert and across Canada