Representatives of Pacific NorthWest LNG one of the major proponents of LNG development in the region provided Prince Rupert Council with an update on the latest developments of their proposed development on Tuesday night.

Appearing in front of Council, Ms. Tessa Gill delivered a review of some of the benchmarks of the program so far, highlighting such items as engagement with local First Nations and neighbouring communities, as well as the status of the company's Environmental process to this point.

Among some of the other highlights of her presentation was  the potential job creation aspects of the project, with 300 permanent jobs in place once the Terminal is constructed, with a further 300 contractor positions also required for Terminal operations. As for training for positions with the terminal she highlighted some work that Pacific NorthWest has done with Hecate Strait Employment Development, suggesting that those looking towards future careers in the industry could find out more through the Hecate Strait offices, or by way of the Pacific NorthWest LNG website.

She also reviewed some background on the recent community engagement sessions that Pacific NorthWest LNG has held across the Northwest, seeking feedback and comment from those in the region regarding their plans as they continue to evolve.

She outlined how some of the past community sessions led to design changes for the Lelu Island Terminal project and how the company continues to seek out feedback through both direct contact and through the Pacific NorthWest LNG website.

As she wrapped up her presentation, she outlined that no firm date has been set towards a Final Investment Decision for the project and that once that has been made the company would be deciding on contractors for the terminal project. 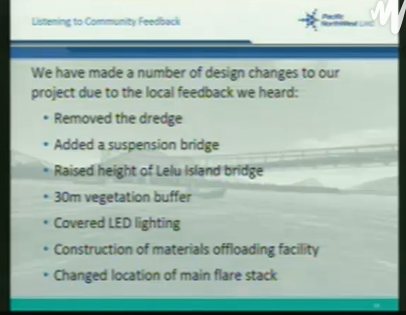 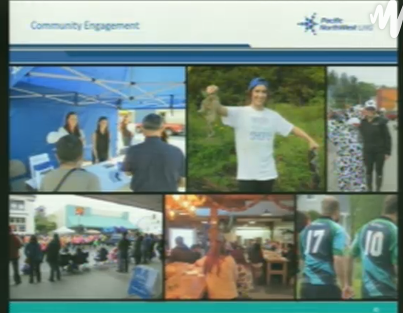 Following her presentation she took a number of questions from Council members, the majority of which focused on the environmental impact that the Lelu Island Terminal may have on the area.

Councillors Thorkelson and Cunningham for the most part carried that portion of the  night's conversation, with Councillor Thorkelson returning to some of her past concerns on the terminal development, asking in particular what aspects of the Environmental Assessment concerns that the company had addressed.

She directed much of her concern on the eel grass issues of Lelu Island and any current impact related to  the changing of the piling structures.

Councillor Cunningham had questions related to the Pacific Northwest socio-economic plan and wondered if they had given some consideration to the impact that their project, which is located outside of the city limits, would have on Prince Rupert which would be serving as the community service centre.

The Mayor took that opportunity to inquire as to whether Pacific NorthWest would be interested in assisting with the funding for the City's plans to seek out a multi stake holder engagement process.

Ms. Gill outlined how the company was interested in co-ordinated consultation, and that they were still reviewing the proposal and waiting for terms of reference.

Both Councillors Thorkelson and Cunningham also had concerns on the impact on the air shed related to the energy generation aspect of the proposal, suggesting that Pacific NorthWest would want to use the best available environmental scrubbers.

Council's line of questioning took up close to seventeen minutes of the half hour presentation, and at times seemed to challenge some of the observations that the Pacific Northwest representative was providing.

Those that might be keeping track of Council's interest in LNG issues, will be most interested to see if council provides the same level of oversight and commentary when it comes to some of the other proposed projects that will be moving forward.

Included in that list of potential developments is the Tuck Inlet project proposed by Exxon/Mobil,  a project which the City has shown the most enthusiasm for in recent months.


A full outline on Council developments can be found on our Council Timeline feature.