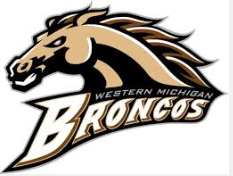 The guy who is hailed on twitter as #TheBigSlubowski,  rose to the occasion this weekend as PRMHA grad Frank Slubowski led the WMU Broncos to an impressive win over the Number Four ranked University of Omaha, going on to hold his own in a losing casuse  in the series finale on Saturday.

The weekend was a highlight reel kind of time for the Rupertite, who tended the twine on Friday and Saturday in his first starts since November.

Slubowski held Omaha off the scoreboard until late into the third period on Friday night, shutting shut down the high flying Maverick offence on the night,  his work considered key to the Broncos hard earned 2-1 victory at Century Link Arena in Omaha.

His Friday night stats review highlighted the task that he was faced with, as he secured the win making 30 saves from the 31 shots directed his way.

The only marker for the home side and the one that ruined his shut out bid coming with only 1:55 remaining in the final period, an Omaha power play opportunity that found its mark.

Such was his effort on the evening, that Slubowski was named the First star of Friday night's game.

Of even more importance perhaps, his work gained a nod of approval from coach Andy Murray, who offered up these thoughts to the M Live News service post game:

"You look at Frank in net and what a great night to come in to the home of the leading team in the conference and do a great job,"

Slubowski's work ethic of the Friday night matchup was rewarded by head coach Andy Murray, as the Bronco's bench boss turned to the WMU veteran once again on Saturday, taking the hot hand into the weekend ending rematch.

Despite Slubowski's efforts though that series finale, the Mavericks of Omaha made their adjustments to Friday night's loss. Dashing any thoughts that WMU may have had of a weekend sweep, as Omaha took the second game of the weekend series by a score of 3-1.

Power play opportunities for the Mavericks proved to be the key to their Saturday victory, picking up all three goals with a bit of extra space on the ice, the first during 4 on 4 play, the the final two on an extended power play.

While the Bronco's may have registered a loss, head coach Murray most likely still found much to like from Slubowski's performance as he faced 34 shots on the night's work.

He found himself back in a starting role after last week's impressive final period of the outdoor Hockey City classic in Chicago, where he played twenty minutes of shut out hockey at Soldier Field.

Marking 7 periods of consecutive hockey for Slubowski over three games, his work in that period will give the head coach much to think about as he considers who will get the start when the Broncos see action this weekend.

WMU, who currently are battling it out in the middle of the pack of the NCHC,  hosts a two game series with conference leading North Dakota in Kalamazoo on Friday and Saturday night.

Some background on the weekend work can be found below:

Email ThisBlogThis!Share to TwitterShare to FacebookShare to Pinterest
Labels: February 2015, Slubowski with two starts in weekend action for WMU