There are still a few weeks before the first of the Northwest cruise ships start to travel up and down the coast of British Columbia and into Alaska.

But with April on the horizon, the British Columbia Cruise Industry is starting to spread the word when it comes to what can be found in B. C.'s ports.

A new information campaign was launched this week, a project which highlights the growing co-operation among four of the province's key ports when it comes to the Cruise industry, with Prince Rupert sharing in some of the focus with Vancouver, Victoria and Nanaimo.

The advertising campaign was launched under the banner of Cruise BC -- All Aboard and makes use of social media to deliver interested travellers to the new information presentation. 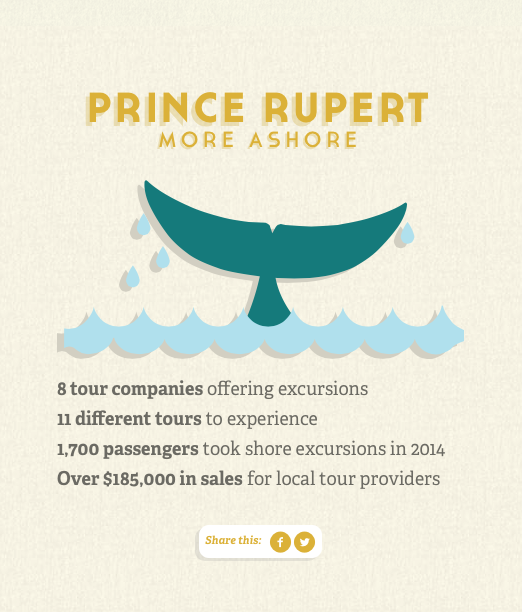 Using the twitter feed of @AllAboardCruiseBC  visitors are taken to an info graphic (see here) where visitors scroll down the page as it takes them up and down the British Columbia coast, with Prince Rupert's segment branded with  Prince Rupert - More ashore.

The short info burst about the North Coast outlines the opportunities in the region for visitors with 8 tour companies offering excursions and 11 different tours available to experience.

It also highlighted the impact that the 1,700 shore excursion passengers of 2014 provided to the community, with over $185,000 in sales for local tour provider.

Prince Rupert's Jeff Stromhdal from the Prince Rupert Port Authority, as President of CruiseBC is one of the industry officials that is spearheading the campaign, he provided some thoughts on the topic as part of the information campaign launch on February 24th.

The much larger overall cruise picture in British Columbia attracted 1.3 million cruise passengers to the province in 2014, providing a total economic benefit to the province of $1.79 billion.

For the 2015 tourism season, Prince Rupert's tourism industry and local merchants and operators no doubt would like to see some of that huge volume of cruise visitors begin to migrate towards the North Coast.

Hopeful, that more of the cruise options that travel the coast will soon make more stops in Prince Rupert,  delivering a larger reward for those that have chosen to specialize in Cruise related opportunities in the region.

The local industry will be watching and using the #AllABoardBC twitter feed as it provides a summer long delivery of information,  offering up interesting suggestions for side trips and possible unexplored local shops and services in the community.

And as it is part of the growing use of social media, that location on twitter will also provide instant feedback for local officials in the tourism industry. Providing them with a snapshot of some of the thoughts from visitors to British Columbia's ports of call for the Cruise season.

You can learn more about the Cruise BC initiative for 2015 from their website.

Email ThisBlogThis!Share to TwitterShare to FacebookShare to Pinterest
Labels: Cruise Industry efforts in 2015