November is Adoption Awareness month in British Columbia and to mark the occasion, North Coast MLA Jennifer Rice spoke to the topic as part of Monday afternoon's statements period of the Afternoon session of the Legislature.

Ms. Rice made note of the 1,000 children currently in the care of the government of British Columbia who are waiting to be adopted and observed as to some of the benchmarks in the provinces care system which see those children in permanent foster care advised by the government that they are officially on her own. 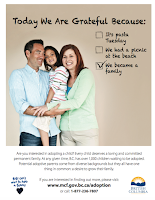 During the course of her short statement to the Chamber, Ms. Rice recounted some of the positive things that have developed in British Columbia's adoption process and applauded the Minister of Children and Family development for some of the government's efforts to help to improve adoption rates in the province.

You can review her full contribution to the discussion from the Legislature minutes for Monday afternoon here at just after the 1:40 point.

The video presentation of her statement can be viewed below:


More information on the adoption process in British Columbia is available from the provincial website.

For more items related to Ms. Rice's work at the Legislature see our archive page here.
Posted by . at 8:50 AM

Email ThisBlogThis!Share to TwitterShare to FacebookShare to Pinterest
Labels: MLA Rice on adoption in the Leg