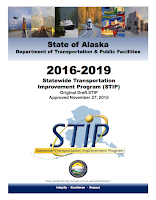 It would appear that the renovations of the Alaska Marine Highway System terminal and dock in Prince Rupert is on a far off back burner, at least if one is looking for it in the just released Statewide Transportation Improvement Program for 2016-19 from the Alaska Government.

The document released yesterday provides a snap shot of every proposed infrastructure or transportation project in the state for the year ahead and in the two areas where the Fairview Terminal might be found there's no mention of it.

The section of the Improvement plan dedicated towards Marine Highway planning showcases ten different items, all of them directed towards points north of the A/B line.

And while the southern terminus of the AMHS seems to be on perpetual hold now, our neighbours to the north will see a number of local transportation items addressed, with 11 Transportation programs for the City of Ketchikan approved by the State.

The planned renovations to the Prince Rupert facility have been delayed owing to the controversy related to building materials to be used on the terminal project, a situation that has yet to be resolved one year after it first became an issue.

More background on the Alaska Marine Terminal project and other issues related to Alaska Ferry service between Prince Rupert and Ketchikan can be found on our Transportation Archive page.
Posted by . at 8:40 AM

Email ThisBlogThis!Share to TwitterShare to FacebookShare to Pinterest
Labels: State Transportation Plan for Alaska released for 2016 to 2019