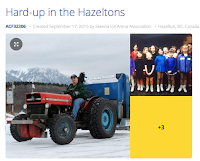 The Hazleton's are celebrating this week, the prospect of a roof for their outdoor rink getting much closer following some good news from a fund raising project they embarked on earlier this fall.

The community which had to close their ancient barn last year owing to safety issues, turned to the old days of the outdoor rink, with some ambitious plans to help tide them over until they can find a permanent replacement.

Their story was so persuasive with voters across the country, that they have found success with the Aviva Community Fund challenge.

Their project created in September was called Hard-up in the Hazelton's and since the day it was launched the support from across the region has been part of the push towards the finish line.

The voting campaign which took place over the last couple of months, found a lot of support from Northwest communities, with the Prince Rupert Minor Hockey Association throwing its support behind the Hazleton bid, requesting North Coast residents offer up their votes to help out the neighbours to the east.

Now that they've been selected by the Fund organizers, the money received from the Aviva funds will be used in three areas.

The first towards the purchase of a used Zamboni for 65,000 dollars.

20,000 dollars will be directed towards the roofing project for the new rink.

While the remaining 15,000 dollars will be used for three months of operating funds from January to March of 2016.

Those funds from Aviva will be additional money to go along with the 100,000 dollars already raised through the Gitksan Government Commission for the roof, as well as the donated materials and labour from community members towards the Zamboni shed which totalled $5,000 dollars.

As well, so far this year the residents of the Hazeltons have raised 10,000 dollars for operating expenses with more events planned.

The rink will go without a roof for this season, however plans are in the works to have it covered by the time next winter rolls around.

You can learn more about their success from this update from the Aviva Community Fund page.

Updates on the work they have been doing in the community on the outdoor rink can be found on their Facebook page.
Posted by . at 8:42 AM