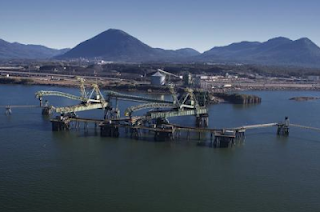 Skeena-Bulkley Valley MP Nathan Cullen is speaking out on last weeks announcement of the Federal government's upcoming plans to turn Ridley Terminals over to the private sector, with the NDP MP calling the Federal move by the Trudeau government a "fire sale to pay for out of control deficit spending".

In a media release today the MP, also referred to the proposed sale as short sighted and as perilous to Canadians today as the attempt by the Harper Conservatives back in 2012.

“It’s frustrating that taxpayers poured a quarter-billion dollars into Ridley to keep this asset afloat in the lean times, but now that Ridley is generating healthy profits and a berth expansion is in the works, the Liberals arbitrarily seize on this as a time to sell.

“The truth is, the Prime Minister wants a fire sale to pay for his out-of-control deficit spending – like tens of billions on snail’s pace infrastructure projects and the cost of the Phoenix federal payroll debacle that now surpasses $1B.”

As we outlined on the blog last week, the Liberals announced their plans on Thursday, noting that as part of the investigative phase of their program, the government would be consulting with Six First Nations in the Prince Rupert area.

Any potential sale of the Coal Terminal facility is not expected to take place until the fall.

“The Government of Canada recognizes the importance of Ridley Terminals Inc. to the local and regional economies. By consulting early on with Indigenous communities on the future of Ridley, we are reiterating our commitment to advance reconciliation and to renew the relationship between the Crown and Indigenous Peoples in Canada. Ridley Terminals Inc.’s divestiture is expected to support continued high quality terminal operations that are economically sustainable and that maximize value for Canadians.”

Mr. Cullen also had some thoughts on the prospect of that consultation with area First Nations prior to the sale, noting how consultation is required but calling for the negotiations to be out in the open so all residents are aware of the process.

“Indigenous consultation is obviously required from both legal and social licence perspectives but let’s get these negotiations out in the open, in the full light of day, so that all residents understand the proposals and parameters.

“Only then can Northwest residents and Canadian taxpayers make an informed decision about whether selling this public asset, so vital to our regional and national economies, is a good or a bad idea.”

Ridley Terminals, which is located in the MP's riding, is one of the major economic engines on the North Coast, you can review more of Mr. Cullen's statement here.

As we observed with our notes of last week, the Skeena-Bukley Valley MP has long had the Ridley Terminals file high on his radar, regularly speaking out when the terminal moves from the pages of shipping journals to those of the news cycle.

A wider overview of Mr. Cullen's efforts in Ottawa can be reviewed here.

To return to the most recent blog posting of the day, click here.
Posted by . at 2:36 PM