The call for nominations period is set to come to an end on September 14th, but for one Prince Rupert City Councillor the time to declare was last week, with Councillor Wade Niesh sharing his decision with Council members and the public at the August 20th Council session.

Mr. Niesh who is serving his first term of office, announced his intention to be a  candidate for Council in the October 20th Municipal election, making him the first of the Five sitting incumbent council members from 2014-2018 to formally advise of his plans.

He was followed two days later by Councillor Barry Cunningham, who made use of his Facebook page to announce his plans to seek another four years at City Hall, noting of his belief that the Mayor and Council have acted as a strong team since the 2014 election. 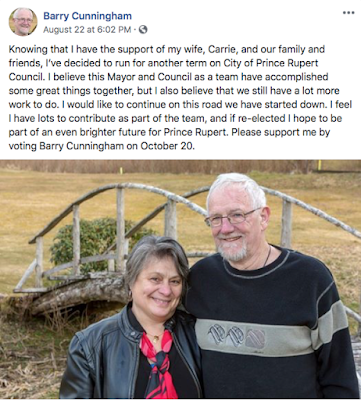 The remaining three council members and Mayor Lee Brain have yet to share their decision with the public, though in the case of Councillor Blair Mirau the decision on his political future could be made public following his late summer vacation plans, a process he outlined through his Facebook portal on Sunday. 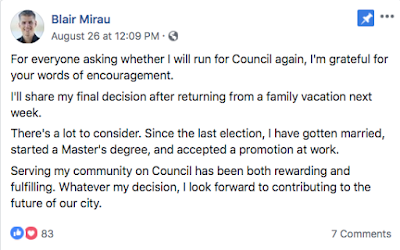 While we await the decision of the remaining incumbents, one newcomer to municipal politics has already declared her intention to seek office, with Ms. Sarah Dantzer launching her candidacy last week, describing her political philosophy as that of a holistic environmentalist.


Active in a number of local initiatives, her most recent work in the community comes by way of the Overlook Community Garden, a program which she helped bring to the finish line earlier this month.

She provided a snap shot of some of her political concepts for CFTK's Helena Skrinjar.

You can review more on her candidacy for civic office from her Facebook page.

You can review the latest notes from the Municipal campaign trail from our archive page here.

Further items of interest from City council can be found on our Council Discussion page.

To return to the most recent blog posting of the day, click here.
Posted by . at 9:29 AM