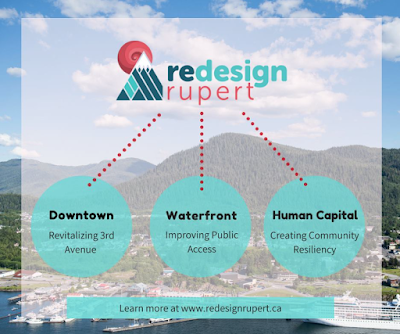 One of the key elements of Prince Rupert Mayor Lee Brain's Hays 2.0 planning gets a reboot of sorts as we head into the fall (and municipal election season) with the introduction of the second phase of the Redesign Rupert program earlier this month.

Gone from the scene is the UNBC based Community Development Institute, the community planning group provided for the foundation of the first phase of the program in those heady and exciting days of planning by the new Council following the 2014 election, with the Redesign vision revealed in February of 2016.

Though as the UNBC institutes mandate began to wind down, so too did much of the visual image of the Redesign program, the concept as we noted on the blog back in February, went dormant for the most part in 2017, with little in the way of a wrap up review, or farewell by the City as to the work of the CDC to be found since.

The topic of Redesign Rupert also seemed to slip the mind of City Council for much of the last year or so as well, with few, if any mentions of the program, or where it stood as a priority for Council getting much of an airing in public council sessions.

As it returns to public prominence this fall,  the focus for this second phase will be directed towards themes such as Human Capital, the need to regenerate the Downtown region and to expand on opportunities for the public on the limited waterfront space that is available to the city.

Those three legs of the focus ahead are explained further in the relaunched website for the program which offers up some of the background to the program's goals and ambitions.

To oversee the program and offer guidance along the way, the steering committee for the second phase of the program, has taken on a heavy civic presence, similar in appearance to the City's engagement with CityWest, Watson Island and the Prince Rupert Airport Boards.

Among those serving on the Steering committee are:

The second phase it seems will now be more of an "in house" program, jointly operated by the City of Prince Rupert and Community Futures of Prince Rupert, the twin bodies bringing Ceilidh Marlow on board as program coordinator.

Ms. Marlow most recently worked for the Museum of Northern British Columbia and brings what she describes as a passion about community planning to her new position.

Funding for phase two of the program is coming from the BC Rural Dividend Fund, the City of Prince Rupert and Community Futures Development Corporation of the Pacific Northwest.

Last week, Mayor Brain revealed the new focus through his Facebook page, hailing the program as an opportunity to bring his Hays 2.0 vision to life in the community, a theme we suspect we will be hearing quite a bit about between now and the October 20th election date. 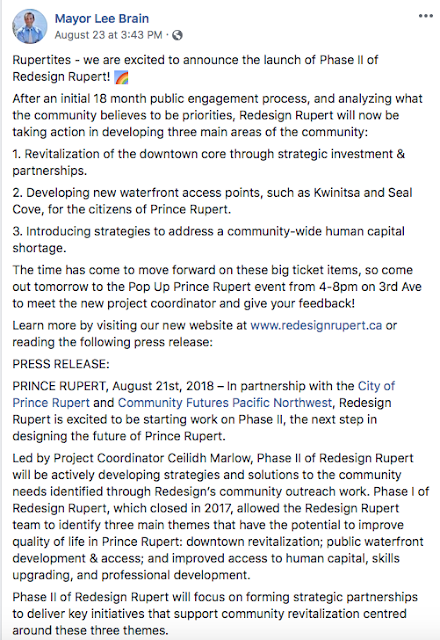 The full press release, along with comments from the participants in the program can be found here.

Among some of the early interest in the next stages for the program is what the city may have planned for Third Avenue West. An area of town that at the moment is in need of some attention and some kind of strategy to rebuild what was once a vibrant commercial core and now takes on an image of abandoned buildings, many in disrepair along with stretches of papered over windows.

A constant reminder of the tough times that the city has gone through over the last ten to fifteen years, as well as to the somewhat limited nature of the city's ability to remedy the situation.

The recent "Pop Up" event one week ago on Third Avenue West provided Redesign Rupert with the first barometer of sorts of what the residents are looking for if the program is to resonate and become more than just another string of consultations and place making exercises. 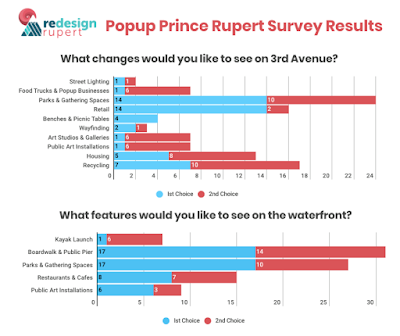 For the downtown area, the need for a larger retail presence and public space dominated much of the findings, while waterfront desires include a boardwalk and public pier and more public gathering spots to enjoy the harbour that at times residents only get a glimpse of.

You can find out more about the future direction for the Redesign initiative from the program website here.

As Ms. Marlow works to deliver on those three goals for the Redesign plan, we'll track the developments from our archive page here, those listings also include our earlier notes on the work of the UNBC CDI program of phase one.

Our observations offer up some background to the work that has formed the foundation of the program, one which now moves towards that period of time where some results will be expected by the public for their investment both monetarily and in time and interest in the program.

To return to the most recent blog posting of the day, click here.
Posted by . at 9:40 AM