Politicians in the Northwest have been visiting, or are in the process of visiting, the area of Telegraph Creek, helping  to bring supplies or to assess the ongoing battle against a raging wildfire in the fart northwest corner of the Province.

Skeena Bulkley Valley MP Nathan Cullen, was in the area on Tuesday and provided a short synopsis of the situation, noting that heavy smoke in the area had prevented a landing at Dease Lake.

The North Coast MLA, who is also the Parliamentary Secretary for Emergency Preparedness has been providing updates on what the province is doing through her Facebook page for much of the week. 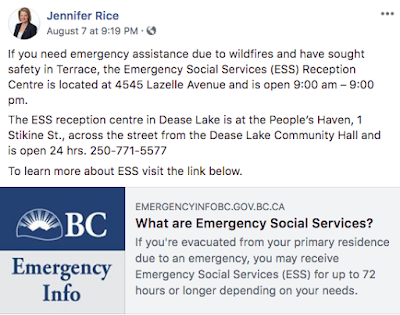 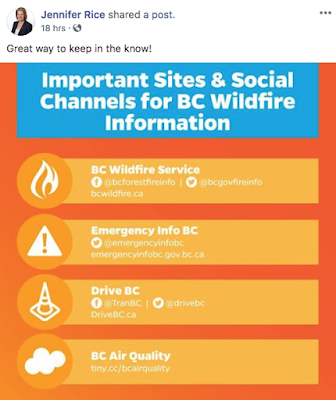 Skeena MLA Ellis Ross also offered up some information for the Terrace-Kitimat area as to how residents there can help out in the relief efforts for those that have been evacuated from the Telegraph Creek area. 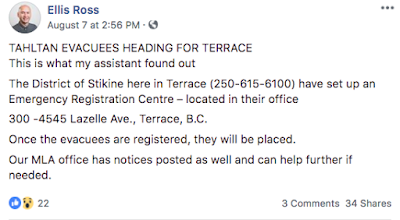 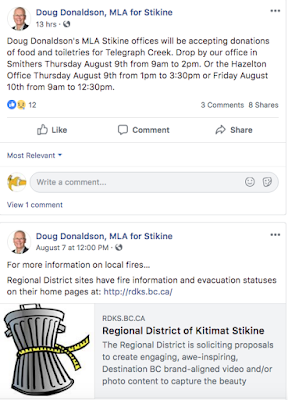 As we outlined yesterday, First Nations governments around the Northwest have been quick to respond to the situation facing the Tahltan Nation, providing financial assistance and other support to address the current emergency near Telegraph Creek.

The most recent development related to that fire is that it has now merged with the South Stikine River Fire taking in an area of 9,000.0 hectares. With a cold front set to arrive in the region today, there is a concern that the increasing winds may have an impact on how the fire behaves.

This fire has now merged with the South Stikine River (R92030 ) fire. Crews and air support are working to minimize further impact to the community of Telegraph Creek. Crews are also working to protect culturally significant sites and infrastructure in the area. Burn operations will be used, if conditions allow, to secure the south flank of the fire.

Today, a cold front is expected to pass through the area and is likely to impact fire behaviour on this and other fires in the complex. Crews are preparing for a possible increase in wind and shift in its direction.

Work is also being done to restore power to the Telegraph Creek area as quickly as possible.

The latest update from the BC Wildfire Service on the Fire in the Telegraph Creek area is available here.

You can review some of the notes we have assembled on all of the fires of the Northwest here.


To return to the most recent blog posting of the day, click here.
Posted by . at 12:06 PM

Email ThisBlogThis!Share to TwitterShare to FacebookShare to Pinterest
Labels: Politicians tour Fire zone of NW BC