Earlier this week officials gathered at the Transition House on Park Avenue there to once again launch the much anticipated, though somewhat delayed, supportive housing project to be constructed on a city owned lot next door.

The project, which was celebrated on Tuesday, will see a thirty six unit modular housing building rise up from the city donated lot.

Funded by the provincial government, once completed sometime in early 2019, it will be set to provide accommodation and supports for the most vulnerable in the community.

That of course is a long needed facility for Prince Rupert and one that has been called for over the years by politicians and community members alike.

As welcome as it is however, it won't address the ongoing issue of affordable accommodation in the city and had those in attendance walked another three minutes to the west down Park Avenue, they could have seen how some members of the community have come together to bring an affordable housing project into the home stretch.

Had the official party for Tuesday's event taken that walk, they would have spotted the old Anchor Inn at 1600 Park, a location where the Prince Rupert Indigenous Housing Society will soon operate 46 units of below market housing, with rents ranging from $375 to $600 per month. 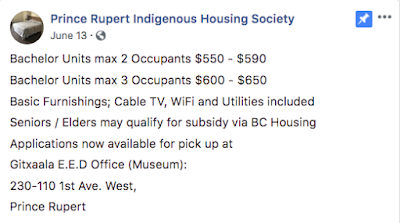 Led by the Gitxaala Nation, the Anchor Inn project is one of a number of properties that have been acquired in the city by PRIHS, part of their quest to alleviate the situation of a lack of housing for those with reduced incomes in the community.

The re-purposing of the building makes for at least a start for Prince Rupert City Council's oft stated goal of providing for housing for those that are struggling in finding decent, safe accommodation in the city.

Not that the city has done much to help keep the cost of housing low in this case.

Last week, as part of a request of City Council for a Permissive Property Tax Exemption, PRIHS submitted some background for the City to consider about their project, included as part of a report for Council on the topic.

It details the scope of the work that has been done to support the city's marginalized population, with the Society becoming a registered Non-Profit organization designed to assist that goal. 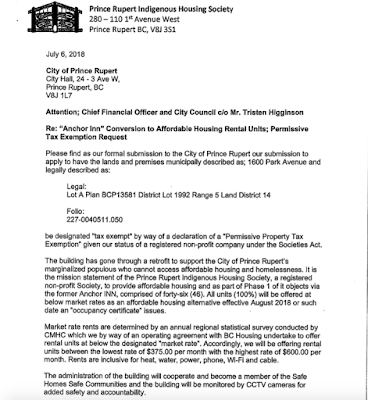 As we noted on the blog last week, the PRIHS request was one of two requests that Prince Rupert City Council turned down, at last weeks meeting.

Other than a suggestion that to grant the exemption in this case would be unfair to other property owners, City council members offered little in the way of discussion on the request, nor did they explore the merits of finding other ways to assist developers that are looking to provide a solution for Prince Rupert's housing issues.

Something perhaps that they should explore a little further in public session, so as to offer incentives for such groups as PRIHS to continue to seek creative solutions to the affordable housing problems that residents are facing.

The prospects for housing for the Anchor Inn location started to percolate last year, shortly after the group took possession of the Park Avenue hotel complex. Since that point work has been non-stop towards refitting the rooms for rental accommodation.

The anticipation for the building to open for residency in September (pending Civic approvals) is such, that the volume of those inquiring about the available suites indicates that the building will be full from the first day of operation and will see a lengthy waiting list for those hoping to find space in the future.

Comments that are posted to the Facebook page that is hosted by Prince Rupert Indigenous Housing Society put the spotlight on the high level of interest in the housing plan for the Anchor Inn, as well as to recount the many thanks to PRIHS for the forward momentum for the project that has been seen so far.

Those with an interest in the plans for the Anchor Inn site, or other housing opportunities that will be offered by Prince Rupert Indigenous Housing Society can contact them at 280- 110 1st Avenue West.

More notes related to Housing across Northwestern British Columbia can be reviewed from our archive page here.