As fire fighters continue to battle the Alkili Lake fire that threatens Telegraph Creek, area First Nations are stepping up to lend support to the Tahltan Nation and the evacuees of Telegraph Creek.

Earlier today, Eva Clayton, the President of the Nisga'a Lisims Government announced that the Nisga'a would be contributing 10,000 dollars towards assistance for the Tahltan Government and its fire fighting efforts.

As well, community members around the Nass Valley are mobilizing to collect donations for delivery to Terrace to be used by those who have been evacuated to the Terrace/Kitsumkalum area. 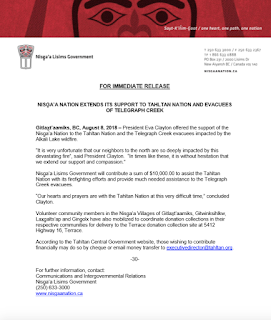 The Haisla Nation has also made a contribution to the Tahltan Central Government,  donating 10,000 dollars towards their efforts during the wildfire emergency.

The Haisla also have directed their residents to the Tahltan Central Government website to find out other ways that residents can offer assistance.

Yesterday as evacuees began to move out of the Telegraph Creek area, the Kitsumkalum Band Council opened the Community Hall for the use of those that were being taken out of the wildfire danger.

The first update for those evacuees took place last night a dinner hosted at the hall. For background all of the wildfires currently burning in Northwest BC see our archive page here.


To return to the most recent blog posting of the day, click here.
Posted by . at 1:01 PM