When it comes to crime in Prince Rupert, suspects of criminal behaviour may tell the odd fib to members of the local detachment of the RCMP, but when it comes to the overall picture of crime, the numbers don't lie ... Crime is on the uptick in the city.

The latest review of the Crime Severity Index from Statistics Canada indicates that the mean streets of Prince Rupert became a little meaner in 2017, with the Prince Rupert City detachment finding almost a thirteen percent increase on the CSI listings from this time last year. 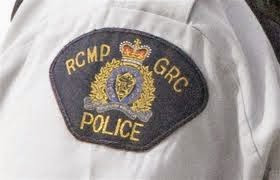 The Statistics Canada Review charts those findings over the course of the last five years, from the release of the most recent data, the Overall Crime Severity Index of 139.14 has brought Prince Rupert back to levels from 2013, the numbers not as bad as those found in 2014 and 2015, but making for an increase from the significant dip of last year.

When it comes to the review of violent crime, Prince Rupert saw an 80 percent increase from its 2016 totals.

Things did improve for the city in there area of  Non-violent crime, with the 2016 numbers providing for  a drop of near fifteen percent between this year and last. 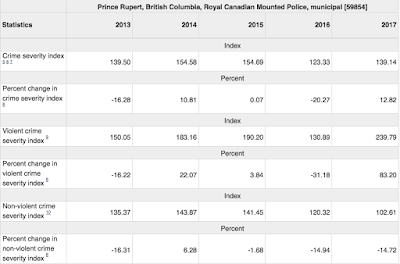 Among the notable listings among the review of incidents that make up the statistical overview include:

Offences against person and reputation - 1

Figures related to Youth Crime in the community were not available as a stand alone total for the five year period of the release, though each individual incident listing does feature a breakdown between adult and youth.

Among some of the more intriguing entries from the full Stats Canada review, Rupertites will be relieved to know, that no one advocated genocide in 2017, nor were there any terrorist related activities in the community last year.

As well if there are illegal gambling houses in the city, they're flying under the radar, with no incidents listed for 2017, the same holds true for prostitution and the operation of bawdy houses.

However, someone, somewhere violated the Canada Shipping Act once in the year just past, though that is a marked decrease from 2015 however, when 14 incidents were reported.

You can review the breakdown by crime from the Prince Rupert City Detachment here.

The Prince Rupert Rural Detachment listings, for incidents outside of the municipal area, show a decrease from one year ago.

For the rest of the Northwest, Terrace however, once again takes the infamous title for Crime Severity in British Columbia.

The Statistics Canada review for the remainder of the Northwest and Haida Gwaii delivers these results.

Queen Charlotte Islands are somewhat more peaceful that the most of the mainland, with both Masset and Queen Charlotte City finding their index number at or below the 100 mark.

You can search for communities across British Columbia and Canada through this Search engine from the Statistics Canada website (click on  the I want to .. section)

Incident based data can be reviewed here.

As for the top spot on the Crime Severity Index, the title belongs to Stony Rapids Saskatchewan. The provinces of Manitoba and Saskatchewan account for seven of the ten communities at the top of the National listings can be found below:

You can review some of the case files for Emergency Responders in the Northwest from our archive page here.


To return to the most recent blog posting of the day, click here.
Posted by . at 11:18 AM

Email ThisBlogThis!Share to TwitterShare to FacebookShare to Pinterest
Labels: Crime Severity Index for 2017