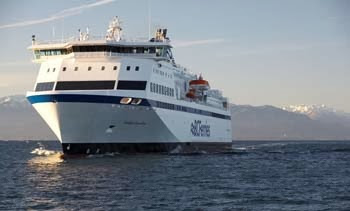 The mechanical woes for the Northern Expedition continue to dog the vessel, with a hoped for return to service for Tuesday scuttled as repairs to the main engine have taken longer than anticipated. 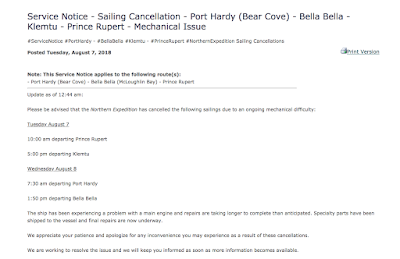 The BC Ferry that serves the Prince Rupert to Port Hardy route of the Northern Service was pulled out of service over the weekend after mechanical issues struck on the northern journey near Klemtu.

The Northern Adventure returned to its more familiar route on Tuesday.

As a result of the ongoing issues with the Northern Expedition, BC Ferries cancelled its scheduled departure from Prince Rupert, with no timeline released as to when they hope to resume service.

You can check up on the status of the repairs through the BC Ferries Service Notices page.

Update August 8:  BC Ferries took to twitter on Wednesday with a progress report on the status of the repairs for the Northern Expedition. 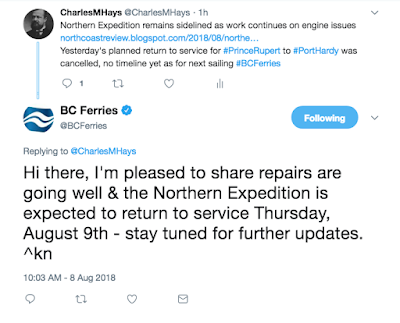 For more items of interest on BC Ferries see our archive page here.


To return to the most recent blog posting of the day, click here.
Posted by . at 9:20 AM

Email ThisBlogThis!Share to TwitterShare to FacebookShare to Pinterest
Labels: Longer delay for repairs to Northern Expedition