A Seniors Housing option for the Anchor Inn?

One of Prince Rupert's hotel properties may be on the verge of a shift in purpose, that is if recent discussion at North Coast Regional District are any indication as to the changing dynamic on the theme of housing in the community.

The Anchor Inn, which is currently closed for operations was mentioned as a potential option for Seniors housing at the May 26th meeting for Regional District, with Prince Rupert Council member Nelson Kinney making note that the City of Prince Rupert was working with Metlakatla on the potential use as a Seniors housing facility. 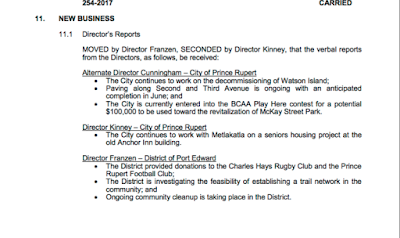 Since that meeting, the City of Prince Rupert has moved forward with two Seniors housing proposals in the community, one from Macro Properties for the old Neptune Inn complex.

The other is a plan proposed by the Metlakatla Development Corporation, that would turn the now abandoned lot from the old King Edward School site re-purposed into the site for the Metlkatla Elders/Seniors Village.

Shaun Thomas, the Communications Manager for Meltakatla, noted in a correspondence with the North Coast Review, that for the moment, there is no work being done on a seniors facility at the old Anchor Inn.

Advising, that the Elders/Seniors Village project and the rezoning process related to, it is the only focus for the Metlakatla Development Corporation at this time.

Where that leaves the future for the Anchor Inn remains to be seen, though Seniors housing now appears to be the one area for development in the community where some significant progress has been found.

As we noted on the blog back in June of 2015, BC Housing had at the time put out a request from hotel or apartment building owners to contact the Housing organization should they be interested in the kind of re-purposing for their facilities.

That is a process that is currently underway in Terrace,where 15 million dollars in spending has been put towards housing needs in that community and could a blue print for similar Prince Rupert options including any ambitions for the Anchor Inn.

With the recent announcements related to Seniors Housing in Prince Rupert, the immediate need for accommodations may soon be something that no longer makes for the urgent list, though an affordable housing model for those not quite to their Senior years could still be something that could be considered for the facility.

For more notes related to Housing  in the Northwest see our archive page here.
Posted by . at 1:20 PM