For the first time in over sixteen years, British Columbia has a new NDP government, as Premier John Horgan took his oath of office and then introduced his new cabinet.

A gender balanced collective composed of twenty ministers and two minister of state, 11 men, 11 women, with Mr. Horgan's newly installed cabinet noted as the first in BC history to achieve such parity.

The new Premier had 40 names to consider, as he pondered what his cabinet would look like, the line up of those that made the final cut can be found below:

With Cabinet status, the Minister who will be Representing Northern interests around the cabinet table will be Doug Donaldson, the MLA for Stikine, who was named as the Minister for Forests, Lands, Natural Resources Operations and Rural development. 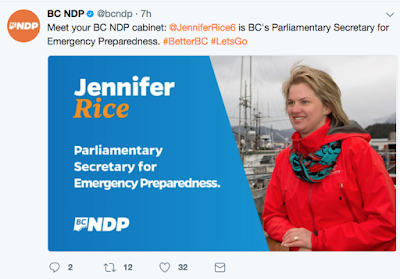 Jennifer Rice, who represents the North Coast, did not make it into the top tier of representatives in the cabinet room, Ms. Rice will serve the government as the Parliamentary Secretary for  Emergency Preparedness.

Joining Ms. Rice in what appears to be the consolation prize round of John Horgan makes a cabinet, are five other NDP MLA's who were appointed to parliamentary secretary duties, they include:


Shortly after the cabinet announcement, Ms. Rice took to her Facebook page to share some thoughts on her new appointment.

Still to come to round out the key requirements of keeping the Legislature moving along will be the need for a Speaker, Deputy Speaker, whip, Deputy whip, caucus chair and deputy caucus chair. So for those not named to a position today, another shot at increased duties could yet beckon.

You can watch a replay of the Swearing in Ceremony from the Government of British Columbia Facebook page here.

A look at how the province's media reviewed the roll out of the Horgan collection can be found below:


More notes on how the North Coast is represented at the Legislature can be found here.

Further background on the province's political scene can be found on our D'Arcy McGee portal
Posted by . at 8:46 AM