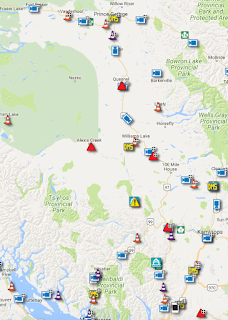 There was little in the way of relief for residents of British Columbia's Cariboo and Highway 97 corridor communities this weekend, with over 230 wildfires now listed as burning by the BC Fire Service and range of evacuation orders now in place for communities large and small.

The largest evacuation started overnight in 100 Mile House as officials in that Cariboo community advised it was too dangerous for residents to remain in their homes.

Residents were directed to emergency shelter accommodations in Prince George to the North,  where the Northern interior reception centre was in operation as one in Kamloops was considered full.

While the evacuees were making their way away from the fire zones, the RCMP and BC Forest Service were reinforcing their forces in the region, with the Canadian Military now also part of the fire response with air units directed to British Columbia to lend assistance.

The work ahead seems challenging to say the least with hot weather and wind fuelling fires across the region, each report seems to offer up yet another report of a new fire having broken out, the most recent notes highlighting some concerns in the Vanderhoof area.

Throughout the weekend, reporters from radio, television and newspaper resources were providing for updates on the situation, as well as offering a glimpse into some of the drama unfolding in the region and impact on residents.

One of the reporters currently logging long hours and filing a number of stories is former Prince Rupert resident Monica Lamb-Yorski,  the former Northern View reporter has been tracking developments for the Williams Lake Tribune.

A look at her impressive work from the region can be found as part of our archive from the weekend; listed under our Williams Lake notes.

For her stories and the full overview of the ongoing state of emergency in the province see our archive page here.

Updates will be added to the page as the day progresses and the situation remains of concern.

The Red Cross of Canada has now launched a BC Fires Appeal, those wishing to donate money towards Wildfire Assistance can learn more about the appeal here.
Posted by . at 8:42 AM

Email ThisBlogThis!Share to TwitterShare to FacebookShare to Pinterest
Labels: Ongoing fire emergency in Interior of BC