An Open burning of materials that resulted in some concerns from residents of the District of Port Edward has resulted in an apology to be issued by the Prince Rupert Port Corporation.

The statement to the public explains how it was an error in classification which delivered material that should not have been included in the five day burn at a Port Disposal site on Ridley Island.

In the statement issued Friday afternoon, Mr. Ken Veldman, the Port's Director of Public Affairs traced the the process that led to the material from the Old Odin Dock site to be included  in previously assembled material related to site clearing from Ridley Island, an inclusion that the Port acknowledges should not have happened.

The Burn took place over five days from June 22nd to June 27th at the Port's disposal site and at the time resulted in many calls of concern, and comments through social media, the majority of them from the Port Edward area, which is directly across from Ridley Island.

The key elements to the Friday information release provide some background into the situation and how the Port plans to address any future Open Burn situations.

Materials in the disposal site included waste materials from the final demolition of the Odin Dock located in Cow Bay in 2015. These materials included treated wood waste from pilings installed when the dock was built approximately 80 years ago.

The majority of material burned at the disposal site in June 2017 was sourced from approximately nine hectares of Ridley Island-related site clearing conducted over the past 24 months, but also included the Odin Dock material.

PRPA did not discover the error until after the burning had occurred, but acknowledges and apologizes to community residents for its mistake.

In the information release, Mr. Veldman notes that it is not currently known if the Odin related material in the Five Day burn resulted in any environmental impact.

In the wake of the incident, the Port notes that they are continuing to work with the BC Ministry of Environment to determine the extent of any non-compliance. The Port also notes that regardless of the ongoing investigation, they have determined that their oversight on the disposal of the Odin Dock material did not represent best practices in environmental risk management.

A review and strengthening of their disposal policies and procedures will now take place, to ensure that the oversight of those procedures will adhere fully towards provincial objectives.

The Full text of their Statement on the Ridley Island Open Burn can be reviewed below: 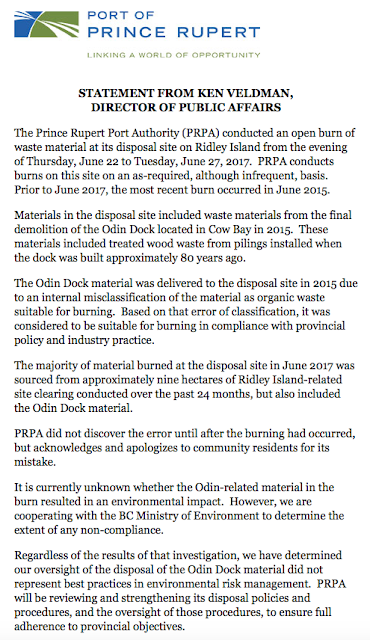 The Port's overview of environmental stewardship offers up some of the guidelines that they follow in the region when it comes to such areas as air quality, noise monitoring and other areas of community concern.

It's towards some of those standards where the Port will be focusing their review to see how they came up short with the June material burn on Ridley Island.

For more items related to the Port of Prince Rupert see our archive page here.