North Coast MLA Rice may want to collect a few copies of the July 6th edition of the Georgia Straight for the political scrapbook, with that Vancouver based newspaper offering up the first suggestion that she might be in line for a spot in Premier John Horgan's cabinet.

In this article from editor Charlie Smith, the prospect of gender balance and the need for representation from the 250 area code is highlighted in his snapshot of Ms. Rice's cabinet potential. 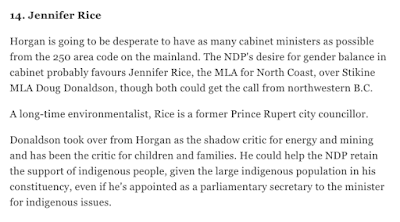 The BC NDP will be officially sworn into office on July 18th and until that point, only Premier Horgan and his inner circle of advisers will really know who has the inside track when it comes to sitting around the cabinet table following the Speech from the Throne.

It's expected that those tapped to take on cabinet responsibilities can expected to be informed the day, or even just the night before the big day.

Though, while the concept of quotas for cabinet may be a theme for the Georgia Straight, it seemingly is not one that appears to be gaining much traction in Victoria at the moment.

In an interview with the Victoria Time Colonist Carole James, the NDP MLA who is serving as Mr. Horgan's transition spokeswoman noted that the Premier designate is evaluating each candidate on an individual basis.

All of the latest political drama will make for ten days or so for Ms. Rice and the rest of the NDP MLA's under consideration to make their best case for inclusion into the cabinet and the opportunity to help shape NDP policy in the upcoming minority government.

Three members of the Legislature that apparently won't have to worry about the pressure of cabinet positions, will be Andrew Weaver and his two newly elected Green MLA's who have helped propel Mr. Horgan's party to its minority status.

In the same Times Colonist article, it's observed that all cabinet ministers will come from the ranks of the NDP, with no plans to appoint Mr. Weaver or any other Green member to the cabinet.

You can track all the maneuvering in the provincial capital from our political portal D'Arcy McGee, where we feature a daily digest of developments on the provincial scene.

For notes related to Ms. Rice's work in the Legislature see our archive page here.