As we outlined on Friday, the City of Prince Rupert is moving forward with their plans for expropriation of a parcel of land at Watson Island, setting in motion a late Friday afternoon call for consultation with the public with this announcement posted to the City website.

However, with a deadline of this Wednesday for any public comments, it's a pretty tight timeline for residents to put together any thoughts, especially considering how they really don't know much about what the city has planned, or any actual cost to the quest by the Mayor and his council to become land barons and potential import/export magnates on the North Coast.

Friday's information release issued towards the end of the business day, outlines the city's plan to amend its Financial plan for 2017, reviewing how their plans to enable expropriation and acquisition of Lot 4 on Watson Island will require an increase of 475,000 to the Land Reserves, bringing the new total to 750,000 dollars.

Council will also be adding on the cost of a 100,000 dollar study to the City's Short Term Debt now to be amended to 990,000. That study is required to explore the cost for jail cell improvements as requested by the RCMP in a recent correspondence with the city. 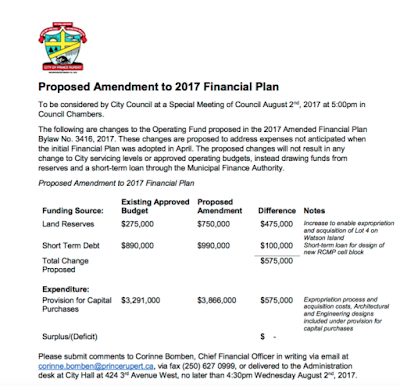 The city's notes related to that addition to the land reserve however don't, outline what the expected final cost of purchase for the Sun Wave lot will be for the city, particularly as they move forward to expropriate the land currently owned by the city's long time nemesis on all things Watson related.

How much the city plans to spend to grab that lot from SunWave is surely something that perhaps the public should hear more about, before they can reasonably be expected to weigh in with any comments on the process.

The pace of that expropriation plan however will be swift, with Council set to address the issue with Two Special Council sessions scheduled this week.

Residents with any interest in offering up comments related to the plan, as they know of it to this point, have only until 4:30 on Wednesday to deliver their correspondence to the City.

As well, with the introduction of what appears to be an ambitious plan from the City to shift from a land seller, to that of a port developer only revealed last week; the City has yet to offer up any kind of cost estimate for the community as to how much additional investment the city may have to make towards the Watson Site as they move towards making the industrial site ready to welcome import and export shipping opportunities.

Also of some interest to the discussion could be the status of the city's legal issues with not only the Sun Wave group, but those of Colonial Coal another group with an interest in Watson Island.

As recently as May 30th of this year, Colonial Coal was still featuring its plans for Watson Island as part of the information flow on their website, noting that "Watco is currently involved in litigation with the City of Prince Rupert in connection with the acquisition of Watson Island."

Hopefully, when Council members do meet this week, they will offer up significantly more commentary and maybe even a few explanations, as to what the ultimate goal for the City will be as they look to provide rival port facilities to those currently offered by the Prince Rupert Port Authority.

So far Council and the City have not been particularly talkative when it comes to explaining their Watson Island plans, and unlike past ambitions such as the Hays 2.0 vision, or other Civic initiatives as ReDesign Rupert or Sustainable City 2030, we have yet to see any flashy presentations delivered to the city's website.

Last weeks Council session featured a review of the plans from the City's Financial Office Corinne Bomben, who was following up on a comprehensive review of the expropriation process that was delivered by City Manager Robert Long on July 21.

However, despite that volume of material to call on, at last Monday's Council session which lasted less than thirty minutes, not one Council member raised any questions, made comments, or offered up any observations related to what is surely a significant shift in the city's vision for the Watson Island industrial site.

More background on the recent history from Watson can be found here.

While further notes related to City Council Discussions from Council sessions can be found on our archive page.

Email ThisBlogThis!Share to TwitterShare to FacebookShare to Pinterest
Labels: Many questions remain on plans for Watson Island