Moneysense magazine has sharpened their pencils, crunched their numbers and delivered their final notes for the annual list of the Best Places to Live in Canada, this one offering up a review of over 417 communities from coast to coast to coast for 2017.

Eleven elements make for the statistical overview, the chart below providing a glimpse as to how each is weighted as Moneysense makes its determinations.

The full explanation as to how they collect and make use of their data can be reviewed here.

Prince Rupert's national ranking came in at 290th place, while on a BC only breakdown the city is listed as 53rd of the 62 communities surveyed for 2017.

The only other Northwest community to gain notice for 2017 was Terrace which received a national ranking of  177th place and BC Ranking of 38th place. The national ranking for Terrace is also drop from their spot from 2016 when they were listed at 116th place. 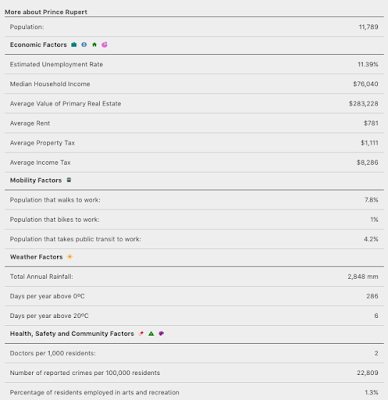 As might be expected, those far from the North Coast glimpse our weather statistics with some wonderment, with total rainfall listed at 2,848 mm and our days of temperatures listed as above 20 degrees but six. On the other hand, those that are shovelling or freezing in January may take note that of the 365 days of the year, Prince Rupert is above 0 for 286 of them.

The larger data breakdown can be found here.

From those findings Moneysense makes note of the city's affordable housing, Low Taxes and ease to get around as key elements for the local overview. 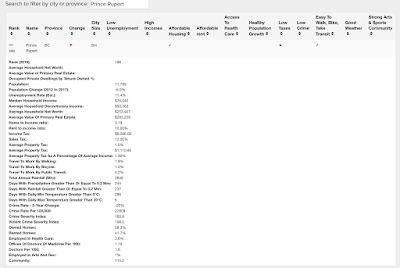 One intriguing feature of the review for 2017, is the recognition that according to Moneysense Prince Rupert is considered one of the best of the regions when it come to Property and Income tax, with the city listed at Number Two overall, Terrace is a bit further down that list at seventeenth place.

Among some of the findings from the report, is a look at some key elements from the statistical review.

When it comes to the state of local economies, Prince Rupert also has some work ahead of it ranked at 370th, with Terrace somewhat better at 337th place.

As for those that have jobs however, Prince Rupert is listed at 240th when it comes to High Wealth and Income, Terrace is listed at 229th.

Home affordability were highlight areas for both cities, with Terrace listed as the 25th most affordable place to find a home, while Prince Rupert ranked at 41st.

Prince Rupert also fared well when it comes to Arts and Community, listed at 58th spot, with Terrace just one spot above at 57th.

Notes related to Health Care in Canada found Prince Rupert ranked at 270th while Terrace fared significantly better listed at 78th of all the communities surveyed.

And when it comes to weather, things aren't as bad as the North Coast weather detractors might suggest, Prince Rupert is not at the bottom of the lice for Nice Weather, ranked at 361st.  Terrace's sun filled summers, must make up for their bitterly cold winters, as they grabbed the 296th spot in the overall rankings for 2017.

The City of Prince Rupert's population estimates also don't seem to have gained  much traction with the online national financial magazine, which holds close to the official Stats Canada population listings, noting the city's population as 11,789.

You can also take on the duties of a statistical review analyst, by making use of their Remix feature, that lets you weigh the range of elements offered to determine which Canadian communities are best for the features you are looking for.

The number one community in Canada is Ottawa, Ontario, with the Nations capital once again claiming the top spot in the annual rankings. At the other end of the liveability spectrum is Colchester, Nova Scotia, one of a number of communities in the Atlantic Province to be struggling and finding those economic troubles reflected in this years presentation.

The Victoria suburb of Oak Bay is the top community from BC in this years rankings, holding firmly onto the number three spot overall in Canada, edging out North Saanich, which was one spot below in 4th.

Port Alberni was the community in BC with the most work ahead for itself, ranked at 350th place.

You can review the full Moneysense review here
Posted by . at 9:06 AM