Aussie Assist ahead for BC Wildfires 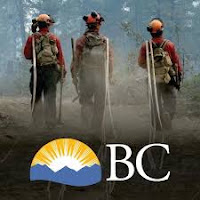 Those on the front lines of British Columbia's wildfire efforts are about to receive some international assistance, as Australia responds to a mutual aid agreement that has been in place between British Columbia and the Australians.

The Australians, some 50 members strong, will be arriving in Vancouver on Wednesday and then deployed throughout the province, directed to where wildfire efforts are underway.

They will be joining more than 1,600 provincial staff close to 1,000 BC contractors and over 450 out of province personnel already on the front lines of the wildfire battle.

It's not the first time that Australians have come to BC, they previously assisted provincial efforts in 2009, 2014 and 2015.

In a reciprocal move, BC firefighters have been dispatched in the past to Australia as recently as 2007 and 2009 to help with the Australian fire season which normally occurs during our winter months.

More notes related to the arrival of the Australians can be found here.

As of yesterday, three of the largest communities along the Highway 97 corridor had been evacuated, with residents of 100 Mile House, Williams Lake and Cache Creek evacuated to larger centres, along with residents from many smaller communities throughout the North and South Cariboo.

Some good news however may be delivered today, as residents of Cache Creek could be allowed to return to their homes by this afternoon.

You can follow up on the latest developments from the efforts in the Cariboo and beyond from our archive page here.
Posted by . at 9:56 AM

Email ThisBlogThis!Share to TwitterShare to FacebookShare to Pinterest
Labels: Help for BC Wildfire efforts