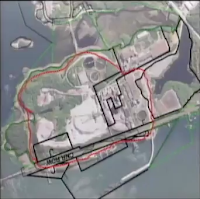 Once upon a time, a city on the ocean involuntarily became the owner of an Island and with it, all of its ghosts, burdens and potential.

That Island was named Watson and that city is Prince Rupert and the tale has become somewhat of an ongoing soap opera.

Monday's City Council session provided for a glimpse into what appears to be some new thinking by the City of Prince Rupert, which no longer it would seem has plans to try and sell Watson Island, the long time bane of many a past council's existence.

Instead, as the City outlined Monday with their plans to expropriate one final patch of land owned by SunWave Forest products and currently beyond the city's control, it would appear to now be more inclined to be a landlord, retaining the island for future use and with it, one imagines the potential for future challenges.

With Mr. Robert Long, the author of the report on the planned expropriation for Watson Island away from the council chambers on the night, the task of reviewing elements of his report and delivering the new vision plan was turned over to Ms. Corinne Bomben, the City's Acting City Manager, Chief Financial Officer and one of three City Staff Directors of the City's Legacy Incorporated.

As Ms. Bomben flipped through her slides for Council members, the highlights of the presentation offered up a snapshot of some of the background to the new thinking, with the City seemingly set to shift from its role as a potential seller, to one of rental agent for the site, apparently now ready to operate Watson Island itself as some form of a small scale port authority.

" ... Therefore, the Island currently has two owners, the City which owns 230 acres and SunWave which owns 13 acres, after the tax sale and for many years since, City Council's objective has been to sell the island.

As such, it did not matter to Council that Sun Wave owned Lot 4, given the dilapidated state of the pulp mill assets and the settlement achieved between Sun Wave and the City, council began the process of decommissioning the mill site in 2015.

Now the decommissioning is nearing completion and the city sees the long term benefits of retaining ownership and instead leasing the island. ... this fits into the city's vision for putting Watson Island back to use as an industrial property for the purposes of getting jobs back and collecting tax revenues which the city has been operating without as the owner of most of the island.

Leasing parcels of the island will also translate into stable lease income. Watson Island is unique in that it has access to waterfront, rail and road, as such the city believes that the highest and best use of the island is for import/export operations.

The plan is to redevelop the island to make it marketable to import/export terminal tenants providing access to shared use areas such as the waterfront, dock rail line and siding, as well as lay down and road"    -- Acting City Manager Corinne Bomben speaking about the city's Watson Island plans Monday night. 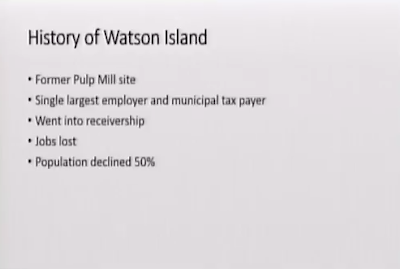 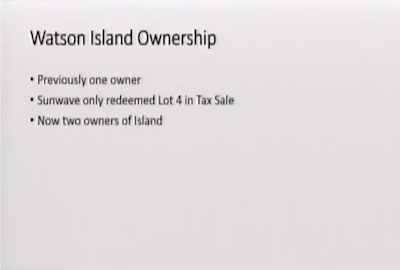 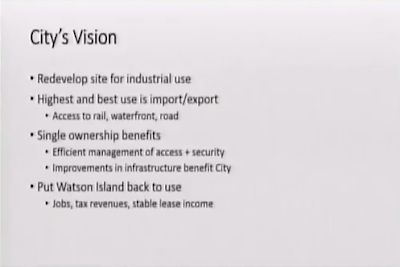 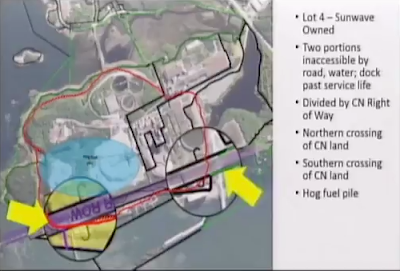 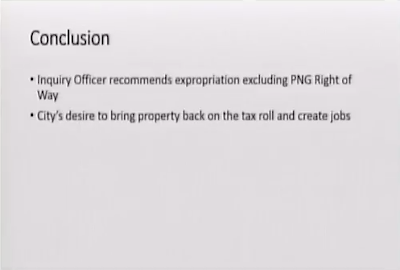 Not stated as part of her review, but surely part of the underlying current to the theme, is the potential in the making for an entire new level of bureaucracy to be created under the city banner, should the City move forward in its plans to hold the land and parcel it out for development, as opposed to selling it outright to someone else.

That's probably good news for people that might be looking for employment with the city, but could only add to the already increasing level of upper management positions that seem to have been generated since this Council took office in 2014.

With the city now exploring a long term interest in Watson Island will come requirements to address any further environmental issues, as well as to deal with the tricky area of being a landlord and dealing with a myriad of tenants and their needs as time goes by.

The timing of this latest initiative is also something that might raise a few eyebrows around town, taking place during the dog days of summer, with many residents out of town on vacation and those that remain behind perhaps not totally focused on civic issues at the moment.

This new vision for Watson Island as reviewed for Council, is one which had not been discussed in a public forum until Monday.  And even on a night with literally nothing else to talk about and with a lengthy report to review to go along with Ms. Bomben's talking points, the Council members had absolutely no questions to ask of the Acting City manager and CFO.

Considering the scope of what they have planned, it's somewhat surprising that neither the Mayor, or the four council members in attendance, apparently found anything worthwhile to discuss in public about both the expropriation report from Mr. Long, or the long term plans to become land barons of the industrial site.

Council did however move quickly to put the wheels  of expropriation in motion, voting to approve the three resolutions related to the night's discussion.

We clearly have come a long way from those first days when Watson Island was thrust onto the City agenda and the only goal of the time, was to find a buyer and return the site to the tax rolls.

What appears to be a significant shift in civic thinking under the current Mayor and City council should however leave more than a few questions for city residents and taxpayers to wonder to themselves.

Considering some of the struggles the city faces in other areas of its overview, such as the airport operations and the ferry transportation to it, the ongoing issues of an aging infrastructure system, as well as their regular duties of just running the city, some might wonder if the city's ambitions towards the world of international shipping , may be a bit of an over reach and whether it poses too large a risk for a community with limited financial resources.

Beyond that, some in the community may wonder if taking on their new development plan for Watson Island is not getting a little bit away from what may be considered the core civic interests and where the city council should best address its interests.

The City's new vision and where they believe the future lays for Watson Island is something that would be worth a much more expansive debate at Council, if only once and a while someone around the Council chamber would actually have something to say on the topic.

You can view Ms. Bomben's presentation to Council from the City's Video archive starting at the twelve minute mark.


You can retrace much of the Watson Island history through our archive page here.

For more background on City Council discussion topics see our archive page here.
Posted by . at 10:22 AM

Email ThisBlogThis!Share to TwitterShare to FacebookShare to Pinterest
Labels: City looks to hold onto Watson Island for development plans