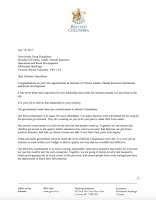 Northwest British Columbia's main conduit to the cabinet table has been given his mandate letter and for Stikine's Doug Donaldson the list of areas where he will direct his attention is rather extensive.

Last week, Donaldson was appointed to the position of Minister of Forests, Lands, Natural Resources and Rural Development and with that appointment will be watching over some key areas of the Northwest economy as well as how communities across the region work with the new provincial government.

From the letter issued on Monday, the new Minister will be working to deliver on three key NDP government commitments, they include:


Our first commitment is to make life more affordable. Too many families were left behind for too long by the previous government. They are counting on you to do your part to make their lives easier.

Our second commitment is to deliver the services that people count on. Together, we can ensure that children get access to the quality public education they need to succeed, that families can get timely medical attention, and that our senior citizens are able to live their final years with dignity. These and other government services touch the lives of British Columbians every day. It is your job as minister to work within your budget to deliver quality services that are available and effective.

Our third key commitment is to build a strong, sustainable, innovative economy that works for everyone, not just the wealthy and the well-connected. Together, we are going to tackle poverty and inequality, create good-paying jobs in every corner of the province, and ensure people from every background have the opportunity to reach their full potential

In addition to delivering on those elements of the NDP vision for the months and possible years ahead, (should the new alliance with the Greens hold) ... Mr. Donaldson will also be expected to keep the NDP's new partners in governance in Victoria in the loop in all developments from his Ministry.

As minister, you are responsible for ensuring members of the B.C. Green caucus are appropriately consulted on major policy issues, budgets, legislation and other matters as outlined in our agreement. This consultation should be coordinated through the Confidence and Supply Agreement Secretariat in the Premier’s Office.

First Nations reconciliation is also a key focus for the NDP as they move towards the fall and beyond and with that, the Minister is expected to move forward on calls related towards that initiative.

As part of our commitment to true, lasting reconciliation with First Nations in British Columbia our government will be fully adopting and implementing the United Nations Declaration on the Rights of Indigenous Peoples (UNDRIP), and the Calls to Action of the Truth and Reconciliation Commission.

As minister, you are responsible for moving forward on the calls to action and reviewing policies, programs, and legislation to determine how to bring the principles of the declaration into action in British Columbia.

You can review to entire list of expectations from his full Mandate letter here.

Mr. Donaldson's mandate letter was one of twenty two such mandates from the Premier released yesterday, you can review all of the cabinet letters here.

As we outlined on the blog last week, North Coast MLA Jennifer Rice was appointed to the position of Parliamentary Secretary for Emergency Preparedness as part of Mr. Horgan's team, a post which apparently does not come with a mandate from the Premier.

For more items related to the new government in Victoria follow our notes on our political portal D'Arcy McGee.

For developments specific to the North Coast see our Legislature archive page here.
Posted by . at 10:04 AM