Another twist in the Watson Island story will be revealed at Monday's upcoming City Council session, with the City Manager, Robert Long set to deliver a report related to the proposed expropriation of lands related to Watson Island.

In his 28 page documentation for Council, which includes a number of attachments, Mr. Long recounts the City's filing of an expropriation Notice for an area on Watson Island known as Lot 4, which is owned by Sun Wave Forest Products Ltd. 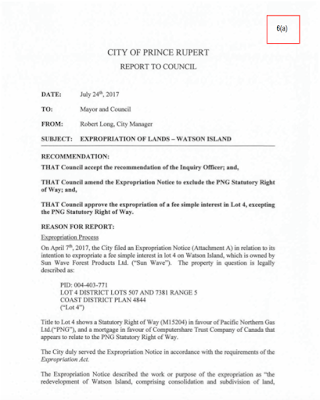 The City Manager's report for Council, also provides the revelation that on May 5th, Sun Wave had served a Notice of Request for Inquiry, with the forestry company alleging that the proposed expropriation by the City was not necessary to achieve the objectives of the City; or that the City's objectives could be met using other portions of Watson Island, a smaller portion of the western portion of Lot 4 or taking less than fee simple interest, such as a leasehold statutory right of way.

From Mr. Long's review for Council, we also now learn that the requested public inquiry took place in Vancouver on June 13, 28 and 29th, with Ms. Corrine Bomben, CFO and Deputy City Manager and Treasurer of Prince Rupert Legacy Incorporated presenting evidence at the Inquiry on behalf of the City. 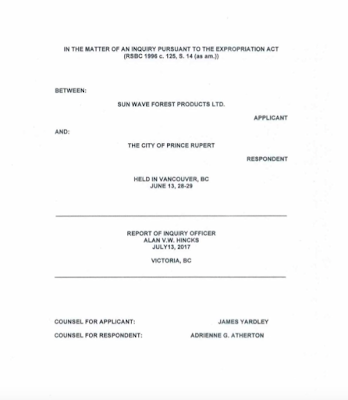 The result of the inquiry was delivered on July 13th.

On that date, Alan Hincks, who was appointed by the Province of BC to serve as Inquiry Officer under the Expropriation Act delivered his recommendation that the City approve the proposed expropriation subject to an exclusion of the PNG statutory right of way that is found on the Watson Island property.

As Mr. Long's report notes, under the Expropriation Act, City Council, as the approving authority, must consider the Inquiry Report and either approve, approve with modifications, or reject the expropriation and must serve his or her decision, with written reasons, on every participant and every owner of the land expropriated within thirty days of receiving the July 13th 2017 Inquiry report, that deadline is listed as August 11, 2017.

The report to Council, which is now available on the City website (see the Regular Council Agenda for Monday, July 24, page 13) will come with three recommendations for Council to review on Monday evening:

That Council accept the recommendation of the Inquiry Officer

That Council approve the expropriation of a fee simple interest in Lot 4, excepting the PNG Statutory Right of Way.

The report also provides some extensive history on the City's efforts related to Watson Island and what plans they have for the Lot 4 area.

Among some of the notes related to the industrial site and the area under review:

A plan of Watson Island is attached as Attachment E. Lot 4 consists of two parts that are separated by the CN rail line, a triangular portion on the waterfront and a rectangular portion upland of the CN line. The triangular portion of Lot 4 has a dock that is at the end of its service life, rail spurs, and a portion of road that navigates all the way around the perimeter of the Island. Watson Island only has two crossings over the CN line to access the waterfront, one of which leads to the road on Lot 4, which is now private property and not accessible by the City.

In order to redevelop Watson Island, it is anticipated that the City will consolidate Lot 4 and then subdivide the Island into parcels that support the needs of future tenants.

The City needs a fee simple interest in Lot 4 to be able to accomplish this. There is no present plan to lease any portion of Lot4. The City will maintain control of this access to the waterfront and rail area.

The full scope of those plans for Watson Island can be found on pages 14 to 17 of Mr. Long's report.

Ms. Bomben's comments for the inquiry also offered up some notes on the current status of the city's ambitions for Watson Island.

In cross-examination, Ms. Bomben acknowledged that there was or were: no report or study in relation to the use of Watson Island for import/export  terminal operations

No plan for consolidation or subdivision of lands on Watson Island

No tenants for land on Watson Island;

No business plan for the redevelopment of Watson Island;

No estimate of revenue from the redevelopment of Watson Island;

No determination of the take-up rate or costs (other than for the cost of rail lines).

Some telling comments related to the City's relationship with Sun Wave come from Ms. Bomben's testimony to the inquiry which  is  found on pages 30 to 45, with the City's Financial Officer providing the city's background on pages 32 to 36

Part of her presentation as part of the Inquiry process noted:

Ms. Bomben testified that the City wishes to acquire a fee simple interest in Lot 4 for a number of reasons including flexibility, control and security. She also stated that given the history of dealings between the City and Sun Wave, the City did not wish to have to deal with Sun Wave as a landowner on an ongoing basis.

One final observation from Mr. Long's report comes towards the end of the document and provides a sample of some of the frustration that the ongoing dispute with Sun Wave has provided for.

Further, it is preferable for the City not to be involved in a long term relationship with Sun Wave, given its history of litigation. Sun Wave has a history of non-responsiveness and requiring the City to take steps to enforce agreements through Arbitration and in Court. Therefore, a leasehold interest is not a feasible option.

Council will review the report, offer up any comments that they may have on the issue and then make their decision related to the recommendations from the City Manager, all as part of their only City Council session for July taking place on Monday.

For more notes related to the ongoing story of Watson Island see our archive page here.

Further background related to Legacy Corporation files can be reviewed here, while City Council issues can be found on our City Council Discussion page here.