The Fairview Container Terminal reached a new benchmark in container handling in June, with port workers receiving and dispatching 91,842 containers through the course of the thirty days, a level that the Port of Prince Rupert noted yesterday makes for the busiest month on record at the Fairview facility.

In a Facebook post the Port paid tribute to the work of DP World, Canadian National and the workers of the Prince Rupert local of the ILWU. 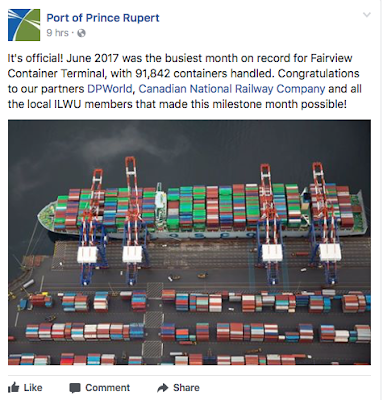 With the second phase and expanded capacity of the Terminal set to go into full operation later this year, the prospect of a significant increase to that throughput will most likely see that new level surpassed in the months to come.

Once the three new Malacca-max cranes are in operation, the capacity for container handling will increase up to 1.35 million TEU's.

The most recent cargo summaries for Fairview from May offer up a glimpse as to the breakdown of import and export shipments that transit through Prince Rupert.

For more notes related to Fairview Terminal see our archive page here, while further background on items of interest from the Port of Prince Rupert can be reviewed here.

Email ThisBlogThis!Share to TwitterShare to FacebookShare to Pinterest
Labels: Strong results for Fairview in June