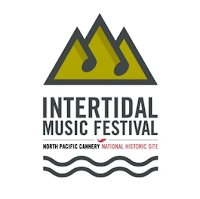 It's been a few years since the North Pacific Cannery Historical Site has had the chance to play host to a day long music festival, with many in the community still holding some fond memories of the old Rollin' on the River days when Port Edward grooved on the tunes with a most spectacular backdrop.

Recapturing some of that spirit and building on it will be the focus for this weekends much anticipated Intertidal Music Festival, a day long event that brings musicians from far and near to three stages at the North Pacific site.

Music makes for the soundtrack to a day of exploration for locals and visitors alike as North Pacific celebrates Canada's 150th Birthday and 150 years of salmon canning.

Parks Canada and District of Port Edward officials will also share a few thoughts prior to a performance from Big Northern Lights and the cutting of the cake to launch the day long event.

The music kicks in on three stages from 1 PM on through the afternoon and into the evening until the festival ends at 9 PM.

In addition to an opportunity to wander the boardwalks and exhibits of the historical site, you can also discover some of the taste temptations of the Cannery Cafe as well as a selection of Prince Rupert's growing food truck scene. Beverage temptations are also being offered by Prince Rupert's Wheelhouse Brewery which will be showcasing its latest creation, the Canada 150 Red Ale.

Those looking to get their Zen on, can head out a little bit early to North Pacific with Free Yoga being offered as part of the festival from 10:30 to 11:30 AM.

The Music will be the focus for the day and it's an interesting mix of musical stylings that will be on display for those in attendance. confirmed for Saturday's musical review include the following:


From Outside the Northwest

Also appearing Saturday are Lance and Jay and Chris Williams

Your guide to which band is playing at one of the three venues on site can be found below:


Putting together such a large scale entertainment event makes for a lot of preparation and planning, not to mention the need for volunteers, many of those that have offered up their time took part in an orientation session on Monday, however if you have some time to help out festival organizers may need a few more hands.

Details on the volunteer work that will be in motion can be found here.

With large crowds anticipated for the event, a transportation shuttle is set for Saturday to bring festival goers to North Pacific with bus trips running between the Historical site and Aero Trading in Port Edward and the Prince Rupert Civic Centre.

The shuttle buses will run from 10 AM to 10 PM and will arrive and depart a 20 minute intervals. On the hour, at 20 minutes and then 40 minutes past the hour.

With the Shuttle system in operation there will be NO PARKING permitted at the Cannery site and access to the site will be limited to the shuttle buses.

Ticket prices range from 20 to 75 dollars and admission to the event can be purchased in advance from the Intertidal Music Festival website.

Day of Event tickets can also be purchased at both the Prince Rupert Civic Centre and Port Edward's Aero Trading location.

Those that head out to the festival site won't be coming home empty handed, festival goers will be receiving a swag bag as part of the day's events, with giveaways planned through the day for a range of door prizes.

Updates on the event can be found from the Intertidal Music Festival Facebook page.

For more notes related to Community events on the North Coast see our archive page here.