A shoe drops for Petronas ... and Prince Rupert is not a good fit for Malaysia's LNG terminal plans

The days of the City of Prince Rupert pushing forward the concept of hyper economic planning may have come to an end today, with the bombshell announcement (though perhaps not entirely unexpected) that the Malaysian energy giant Petronas has cancelled its plans to build the Pacific NorthWest LNG terminal project at Lelu Island

In a very short announcement posted to the Pacific NorthWest LNG website, the cancellation of the project was delivered, and with it another major project slips from the Prince Rupert radar.

The advisory notes that following an extensive review by the company the project will not be proceeding, with PNW further thanking those that had supported the project, with a particular note of thanks directed to the Tsimshian First Nations, and those in Port Edward and Prince Rupert who had long backed the project. 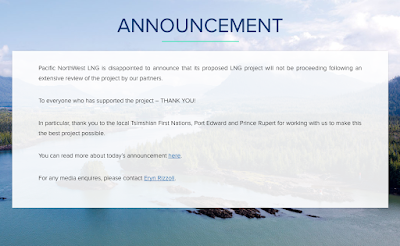 A more expansive media announcement, notes that the decision was made by Petronas and its partners after a careful and total review of the 11 billion dollar project amid changes in market conditions.

Anuar Taib, Chairman of the PNW LNG board observed as to the market forces at play in the decision.

Adnan Zainal Abidin, the President and CEO of PNW LNG outlined some of the background to the decision of today through the media release:

In particular, I want to recognize area First Nations, the District of Port Edward, the City of Prince Rupert, and their communities for their invaluable support and involvement in the project. I would also like to acknowledge the Pacific NorthWest LNG project team for all their dedication and hard work.

The PNW LNG project had been approved by the Federal cabinet back in September with 190 conditions attached to the approval process, at that time Petronas launched its review of the proposed development.

The media advisory notes that Petronas will continue to develop natural gas assets in Canada and will explore all options as part of their long term investment strategy, though there is no indication as to how they plan to get those resources to market.

Today's announcement closes the book on what would have been one of the largest development projects proposed for the community and will be greeted by a mixture of disappointment from those that had hoped to see the project move forward, while those that were against the project from the beginning will be taking today as a victory.

You can review the full Petronas backgrounder from today here.