Prince Rupert Mayor Lee Brain returned from his four week break from civic duties on Tuesday and the first order of the day was to offer up his and the City of Prince Rupert's best wishes to the new NDP Government, which took its oath of office on a Tuesday afternoon ceremony in the capital.

Taking to his Facebook Social Media feed, Mayor Brain took note of the change of government in Victoria and in particular the new jobs for Mr. Horgan and Ms. Rice, adding that the City is looking forward to working collaboratively with the new government on a variety of local and regional issues. 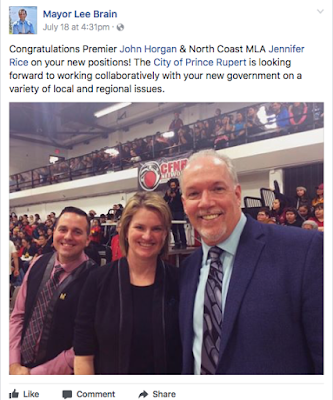 During the course of the 2017 election campaign, the City of Prince Rupert had submitted six questions for the local candidates as part of City Council's engagement in the electoral race for the North Coast seat in the Legislature.

The six questions from May perhaps provide a glimpse as to some of the issues that Mayor Brain and his six council compatriots may be following up on with Mr. Horgan and Ms. Rice as the summer continues on.

1) Given the significant tax burden on our homeowners and small businesses caused by the provincial Port Property Tax Cap and the declining annual tax revenues from port operators, if elected, how will you and your party ensure the City of Prince Rupert experiences fair financial benefits from port-related development?

2) What will your Party do to support the City of Prince Rupert to prepare for major economic growth?

3) If elected, how would your party support the municipal Re:Build Rupert infrastructure program?

4) Do you and your party support the City of Prince Rupert's position that the Ridley Island Tax Sharing Agreement through the provincial government needs to be renegotiated to be fair for Prince Rupert taxpayers?

5) Will you and your party consult local communities on the location of major projects before leasing land or making location decisions?

6) Will your Party, if elected as government, support regional fair sharing of major project revenues through the Northwest Resource Benefits Alliance?


The answers to the six questions from two of the three candidates of the campaign, included Ms. Rice's thoughts on the topics and  were delivered through the Mayor's Facebook page.

As we noted on the blog on Wednesday, Ms. Rice was appointed to the position of Parliamentary Secretary for Emergency Preparedness by Mr. Horgan, with the North Coast MLA taking on her new role as part of the formation of the new NDP government in the minority parliament.

For more notes related to City Council developments see our archive page here.
Posted by . at 8:47 AM